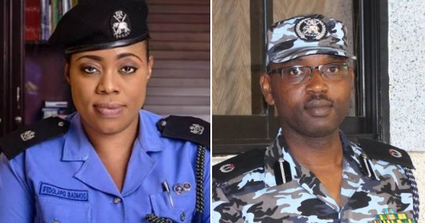 Hours after the Police Service Commission announced its readiness to dismiss 37 former SARS operatives, the names and service numbers of the officers have been released.

The names of the 37 officers were penciled down for dismissal following Nigerian youths’ protests against the activities of the recently-disbanded Special Anti-Robbery Squad of the Nigeria Police Force.

The youths have also been calling on the federal government to reform the force.

But in a series of tweets on Saturday, October 17, 2020, Ayo Akanji, a member of President Muhammadu Buhari’s media team released the names and service numbers of the dismissed officers on Twitter.

Popular police officers, Abayomi Shogunle and Dolapo Badmus are on the list of officers punished for misconducts

He however said Dolapo and Shogunle are among the group of officers that were punished demoted.

Recall that the PSC had on Friday said 37 ex-SARS officers would be dismissed while 24 would be prosecuted for various acts of professional misconducts.