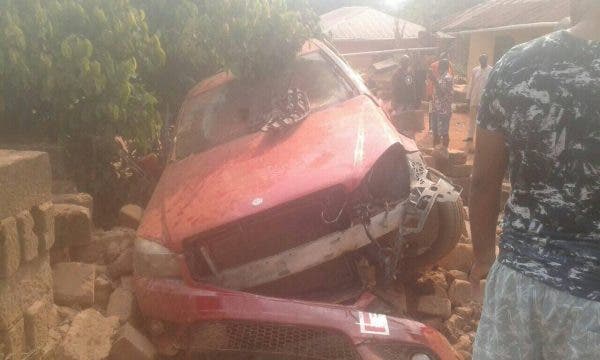 A driver who had the learner sign on his car reportedly crushed six children to death in Edo state.

According to eyewitnesses, the six children which included four girls and two boys said to be siblings, were playing football on the street when the driver while trying to dodge a pothole swerved to where they were and crushed them to death.

It was gathered that the tragic incident happened in Arue-Uromi, Esan-North East Local Government Area of the state.

Following the tragic incident resident of the community immediately blocked the road and set the car ablaze.

In other news, A 50-year-old trader, Mrs. Tuale Iwejim, died after she was hit by a 16-year-old boy who was using his mother’s SUV to test his driving skills at the Arena Shopping Mall, Oshodi, Lagos State.

His mother went back to pick their remaining items and asked him to wait in their vehicle. While waiting, some persons began to complain that the SUV was obstructing the free flow of traffic in the complex. Instead of informing them that he couldn’t drive, the teenager took the keys from his mother’s bag and hopped on the driver’s seat. He was said to have put it in reverse and hit the 50-year-old two times

Continue Reading
You may also like...
Related Topics:Car with Learner sign crushes six children to death in Edo