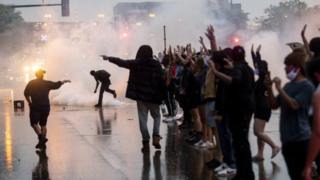 There have been violent clashes between police and protesters in the US city of Minneapolis following the death of an unarmed black man in police custody.

Video of the death shows George Floyd, 46, groaning “I can’t breathe” as a policeman kneels on his neck.

Four police officers have been fired, with the mayor saying that being black “should not be a death sentence”.

Viewpoint: Why racism is worse in the US than Europe

The incident echoes the case of Eric Garner, who was placed in a police chokehold in New York in 2014. His death became a rallying call against police brutality and was a driving force in the Black Lives Matter movement.

What happened at the protests?

They began in the afternoon on Tuesday, when hundreds of people came to the intersection where the incident had taken place on Monday evening.

Organisers tried to keep the protest peaceful and maintain coronavirus social distancing, with demonstrators chanting “I can’t breathe,” and “It could’ve been me”.

Protester Anita Murray told the Washington Post: “It’s scary to come down here in the middle of the pandemic, but how could I stay away?”

A crowd of hundreds later marched to the 3rd Precinct, where the officers involved in the death are thought to have worked.

One protester told CBS: “It’s real ugly. The police have to understand that this is the climate they have created.”

Another said: “I got on my knees and I put up a peace sign and they tear-gassed me.”

Police said one person had suffered non-life-threatening injuries after being shot away from the protest area but gave no further details.

What happened to George Floyd? 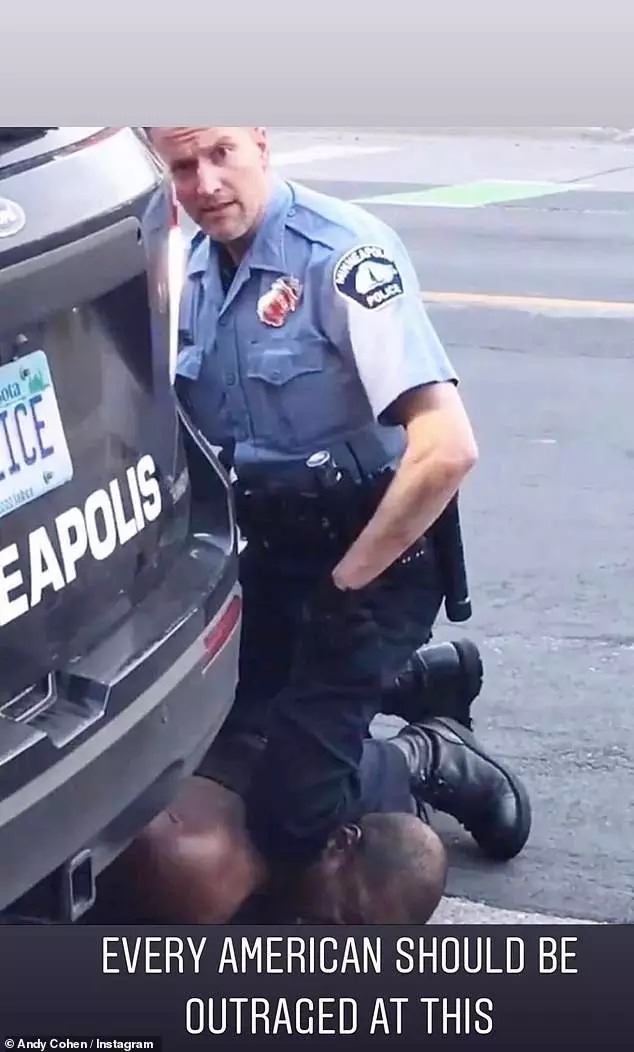 Officers responding to reports of the use of counterfeit money had approached Mr Floyd in his vehicle.

According to police he was told to step away from the vehicle and physically resisted officers.

A police statement said: “Officers were able to get the suspect into handcuffs and noted he appeared to be suffering medical distress.”

The video taken at the scene does not show how the confrontation started.

It shows a white officer using his knee to pin Mr Floyd to the ground by the neck.

Mr Floyd groans “please, I can’t breathe” and “don’t kill me” as bystanders urge officers to let him go.

Mr Floyd ceases to move and an ambulance arrives to take him to hospital where he later died.

What was the official response?

Mayor Jacob Frey said it was the “right call” to fire the officers.

He said: “Being black in America should not be a death sentence. For five minutes we watched as a white police officer pressed his knee into the neck of a black man. For five minutes. When you hear someone calling for help, you are supposed to help.”

The FBI is investigating the incident and will present its findings to the Minnesota state’s attorney for possible federal charges.

There have been calls from some for the officers to be charged with murder.

The Minnesota police handbook states that officers trained on how to compress the neck without applying direct pressure to the airway can use a knee under its use-of-force policy. This is regarded as a non-deadly-force option.

Why is the case so sensitive?

Allegations of police brutality have been constantly highlighted since the start of the Black Lives Matter movement. It began after the acquittal of neighbourhood watchman George Zimmerman in the shooting death of African-American Trayvon Martin in February 2012.

The deaths of Michael Brown in Ferguson and Eric Garner in New York in 2014 sparked huge protests.

“I can’t breathe” became a national rallying cry as Garner, an unarmed black man, uttered the phrase 11 times after being detained by police in a chokehold on suspicion of illegally selling loose cigarettes.

The New York City police officer involved in Garner’s arrest was fired five years later, but no officer was charged.