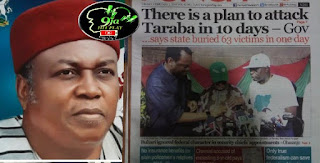 The Governor of Taraba State , Mr . Darius Ishaku, has said there is a plan to attack the state in the next 10 days . 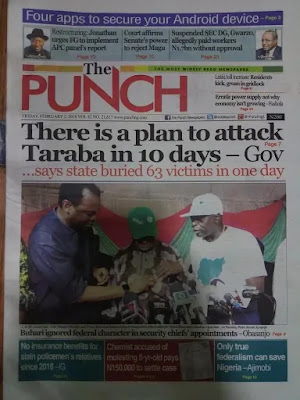 Punch reports that the governor also said the information had been passed to security agencies , adding that he was not aware that any action had been taken .
Ishaku spoke in Jalingo on Thursday when he received members of the National Working Committee of the Peoples Democratic Party who paid him a sympathy visit on the death of a member of the state House of Assembly , Mr . Hosea Ibi .
The governor said ,

“ We buried 63 people at Lau, the same day that Benue State buried 73 of its people . We are in trouble in this country.
“ If our voices are not heard in Abuja , they can be heard in Kano, Niger Republic , United States of America and other places .” 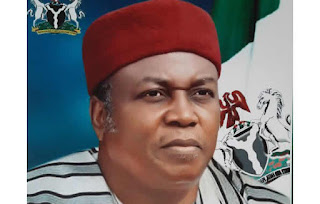 The governor made his comments on Thursday, February 1, during a condolence visit by members of the National Working Committee of the Peoples Democratic Party (PDP), concerning the death of a member of the state House of Assembly, Mr Hosea Ibi.
During the visit, the governor told the delegation which was led by Uche Secondus, PDP National Chairman, that he had passed the information on to security agencies, but was not aware if they had taken any action on the matter.
He lamented over the fact that peace had become scarce in Taraba state. 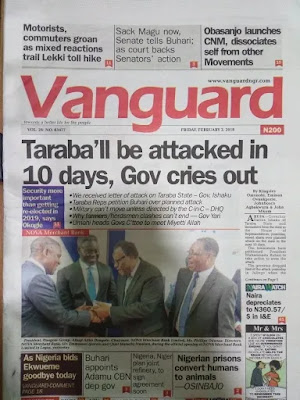 Vanguard is also reporting about the security situation in Taraba state, as regards the alarm raised by the governor about an impending attack.
According to the publication, the alarm about the planned attack on the state in 10 days was also raised by lawmakers from the state in the House of Representatives.
The lawmakers have reportedly petitioned President Muhammadu Buhari to take action to stem the attack.
The publication further reports that Governor Ishaku stated that the security situation in Taraba was as bad as that of Benue; even as he noted that the state has had its share of herdsmen attacks and killings since the beginning of the year.