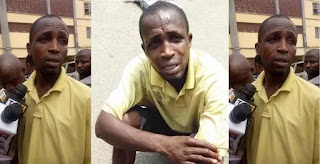 A seven-year-old boy, Wisdom Adefemi yesterday said his father, Olusegun Adefemi sexually abused his three-year-old sister, Favour, five times.
Wisdom also accused his father of attempt to penetrate him and his five-year-old brother, Godspower, through the anus.
He gave graphic details of the alleged incident during a chat with The Nation at the police headquarters, Ikeja, alleging that their father physically assaulted him for refusing to give in.
Wisdom said: “My daddy slept with Favour from here (pointing at the private part of his sister.) He put her on the ground and then he did it. It was not once, it was five times. 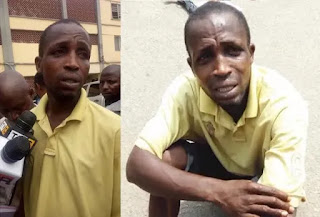 “He wanted to do my own from the back but I refused. He wanted to do Godspower too. When we refused, he started beating us.”
Parading the suspect, Police Commissioner Edgal Imohimi said he was arrested on February 2, at 6, Ipakan Street, Ijede, after an official of Lagos Neighbourhood Safety Corps (LNSC), Adekoya Sesan reported the incident.
But the suspect, denied the allegation, insisting that he was innocent.
According to him, the allegations against him were shocking, wondering what could have prompted it.
Adefemi said: “I am shocked at the allegations. I am innocent. I have never done it and I will never do it. I heard that my children accused me.of raping their sister. They never said it before me.
“I thought that they would bring them before me and ask them so that I can hear it from them directly but the police did not.
“You should know they are children and can be lured with biscuit or sweet to say anything. I do not know where that came from. I know I usually beat my kids when they do wrong. I do not think that is an offence because I would want my children to grow up badly.
“Their mother left over a year ago and since then, I have been with them. I do bricklaying job sometimes, other times, I work as a conductor to provide our daily bread.”
The police boss said Adefemi separated from his wife over alleged spousal abuse.
Imohimi said: “He inflicted grievous injury in the private part of the child as a result.of forceful penetration. Two older siblings of the survivor were not luckier as Olusegun Adefemi regularly abused by beating them with cane each time they resisted him from penetrating them.theoufh their anus.

“The girl has been taken to Mirabel Medical Centre for examination and treatment while her siblings have been placed in temporary home. The suspect would be charged to court at the end of investigation.”

0
Previous post Police declare Babangida’s spokesman wanted
Next post Driver dies after he was allegedly pushed in to a moving trailer by a Police officer for refusing to pay bribe in Edo state.
Admin