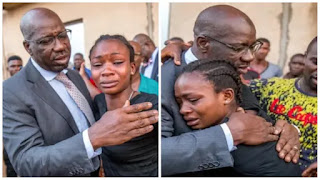 – Governor Godwin Obaseki visited the family of late driver David Okoniba
– Obaseki also set up a N10 million trust fund for the two children of the deceased
– Okoniba was pushed in front of a moving truck by a police officer
Governor Godwin Obaseki of Edo state, on Friday, visited the family of David Okoniba, the late driver who was crushed to death by a truck after allegedly being pushed by a policeman for failing to give a bribe of N200. 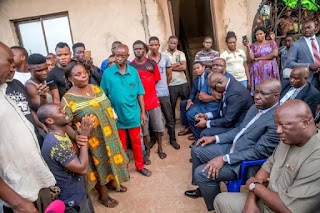 The governor, who visited the family with members of his cabinet, said he has set up a N10 million education fund for the two children of the late Okoniba, Vanguard reports.

Condoling the family, Obaseki said: “I am here today to get the details of what happened. Listening to you, I am heartbroken. I can feel your pain and appreciate your pain and anger. I want to assure the family that the case will not be swept under the carpet.
“It will be followed to a logical conclusion as a reputable retired Judge of Edo state High Court, Justice Olubo has been selected to head the panel of enquiry which will investigate what truly happened on the said date of the incident that led to the death and consequent fracas between the youths and the police.
The governor announced a N10 million education fund for the two kids of late David Okoniba. Photo source: Vanguard
“I learnt that the deceased has two children. I have released N10 million fund to be used for their education, to reduce the pain of the absence of their father and ensure their education does not suffer much because of this incident.”
The governor was accompanied by members of his cabinet to visit the bereaved family.
The governor also promised the family that government will support in the burial of late David Okoniba and advised the family to take the wife of the deceased to the hospital for medical attention at government expense, as she was still traumatised from the incident.

0
Previous post How I survived 2 suicide missions in the hands of Boko Haram – Teenager
Next post “I use human flesh to make money ritual for people” – Islamic cleric (Alfa), pastor & two others arrested for possession of human parts in Ibadan
Admin