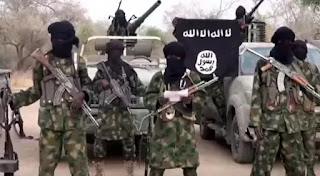 A certain teenager called Falmata has narrated how she was twice abducted by Boko Haram terrorists, and sent on suicide missions each time
– After changing her mind during the first mission, she was abducted again as she attempted to escape
– She managed to escape a second time around after being prepared for another suicide mission, and eventually made her way to safety with the help of farmers, hunters and a local family
A 14-year-old girl only identified as Falmata, has narrated how she survived, after being ordered to carry out suicide missions, twice, by Boko Haram terrorists, BBC reports.
The terrorists reportedly took her to a makeshift camp when she was 13, and placed her with other girls.

According to reports she was given two choices – either to go on a mission or marry a fighter. As she could not bear the thoughts of getting married at such a young age, she opted to go on a mission instead.
She stated: “The young girls were put in the tents. There were nine in mine and we had to sleep on big mats.
“At first I wanted to escape but there was no chance.”
She further narrated that the routine in the camp was to wake up, pray, eat, clean, pray, eat, and clean.
She further stated that the girls were constantly scared that they would be caught up in the military’s aerial onslaughts, and that the sight of helicopters led to great panic.
She stated: “We were scared that soldiers would storm the camp at any time and not spare us, the women, because they would think we were the fighters’ wives.
“When we saw them (helicopters), many of us cried. Some would even soil themselves.”
Going further, Falmata bravely narrated how she was finally told to go on the first mission. She said one of the fighters told her to prepare for “something important”; after which, some women straightened her hair and decorated her feet.
She said: “All I was thinking was, ‘Is it for marriage or what?’ But you can’t ask why you’re getting this done. Instead friends just console you and tell you to be patient.”
Two days later, she had a bomb strapped to her waist and was told to “kill non-believers and you would go straight to paradise.”
She continued: “I was so scared that I started crying. But they kept telling me to be patient, to accept that this is what life is about.”
“(They said) that on reaching paradise, everything would be better.”
In addition to herself, two other girls were strapped with bombs, and they were all taken to the outskirts of a village.
They were told that someone would be keeping an eye on them, and that they should walk towards the busy areas.
However, the girls changed their minds on the way, and fled for safety. Falmata said she asked a stranger to help take off her belt, and proceeded down a dusty road.
Unfortunately, she was back into captivity again shortly afterwards, as she ran into two Boko Haram terrorists who belonged to another unit.
She was subsequently taken to a new camp, where life resembled that of the former.
A month later, the fighters in the new camp gave her the same choices of either marrying or going on a suicide mission. Again, she chose the suicide mission.
But luck shined on her as she somehow managed to escape, after the fighters left.
She stated: “I met some farmers and asked them to help me remove the belt. I told them I was being forced to carry out a mission, but that I didn’t want to do it.”
After the farmers helped her get rid of the belt, she joined a group of hunters through the woods, in a bid to reach her family in Maiduguri, the Borno state capital.
However, the terrorists struck a third time. But luckily again, she managed to escape into the forest.
She stated: “I didn’t know the forest. Every little sound would scare me, so I kept moving. I’d sleep on trees when I could.
“I think I spent a whole week without food. I would drink stagnated water and also use this water to wash my hands and feet when praying.
“I would pray two or three times a day whenever I could find water. I was so scared, but God helped me and I reached a town.”
Falmata was eventually reunited with her family after receiving shelter from a local family who helped her get back home.
On her zeal to survive against all odds, she stated:
“I wanted to live. Killing is not good. It’s what my family taught me and what I believe in too.”

In a related development, According to previous reports, the Nigerian Security and Civil Defence Corps (NSCDC) in Adamawa rescued a certain Mumina Hamidu, a 19-year-old lady who
escaped from Boko Haram insurgents in Sambisa Forest .

The state’s commandant of NSCDC, Mr Aliyu Ndanusa, said that Mumina was rescued with her eight-month-old baby, and that she was abducted in Mubi town when it was occupied by the insurgents in 2014.