Naijahitplay
Must read: Warnings of the New wave 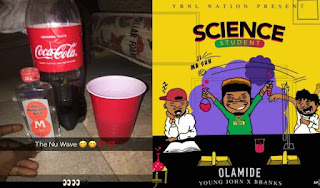 Apparently, Methylated Spirit and Coke, is the ‘new wave’ among Nigerian youths.

When Olamide’s “Science Student” was released early this year, it was heavily criticised for endorsing and celebrating an already worrisome drug culture among Nigeria’s youth. 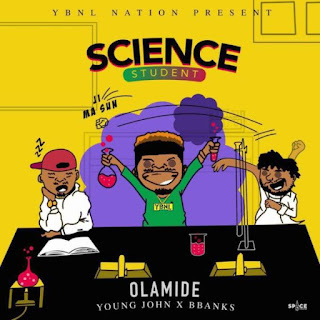 His defence, and that of many who spoke in his favour was that he was only highlighting the problem and calling the attention of those at the core of it to do better and take charge of their lives.
Now that we are seeing photos of methylated spirit and Coke, we are inclined to believe Olamide was right.
You may think you’ve seen it all but apparently, there’s a new trend among those craving the euphoria of a momentary high.

Apparently, young men are mixing medical-grade methylated spirit with the popular soft drink, Coca-Cola to create a cocktail that gets them high. This unholy mixture is yet to have a name but from all indications, it is catching on fast.
In recent months, the drug culture among Nigerian youth has drawn increased attention.
Young people across the country are turning to an assortment of drugs, herbal and pharmaceutical, in a bid to fight what has been described as a deathly wave of depression.
That and a wave of disillusionment at the lack of opportunities have been blamed for a culture of abuse that stretches from Lagos to slums in Kano where codeine can cost the same as a plate of food.
But this new drift towards mixing and creating new substances is even more troubling and defies simple explanation.
The term “Science Student” from Olamide’s song of the same title refers to young persons who mix intoxicating substances of various kinds to achieve an intense high that they can vary to suit their desires.
Coca-Cola is a beverage that nearly everyone is familiar with but we can’t say the same for the other guy. 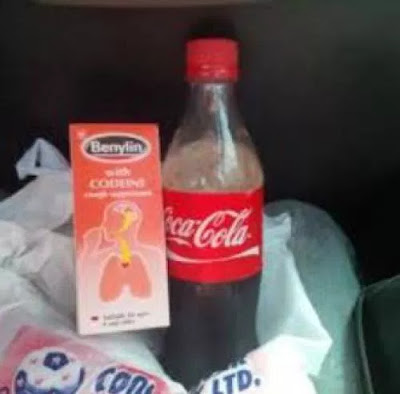 Methylated Spirit is basically alcohol made for general medical and pharmaceutical use that has been made unfit for drinking by the addition of about 10 percent methanol and typically also some pyridine and a violet dye.
These additives make it taste bad and more importantly, poisonous.
Methylated spirits are toxic to human beings. It is denatured alcohol and should really only be used as a fuel source or chemical solvent.
If it doesn’t make you go blind, it will kill you. Ethanol consumption can cause blindness after many years, but drinking too much denatured alcohol one time can render blindness.
Mixing this spirit with coke might douse the bad taste but it doesn’t change the fact that in a bid to get high, young people are slowly doing irreparable damage to their own bodies.
Drug abuse has now become a hydra-headed monster. As appealing as the idea of placing stringent rules on the sale of drugs may seem, it is too obvious that it does nothing to solve the problem.
A good place to start would be tackling the causes of the issue and giving young people a chance in a country that tells them one too many times that they do not matter.
Most of these cocktails are made by young men who do not know better.
It would go a long way if agencies and schools could teach the perils of drug abuse beyond a page or two in social studies and the weekly sermon that promises hell for all sinners.
Here’s what a Doctor has to say about the methylated spirit and Coke trend; 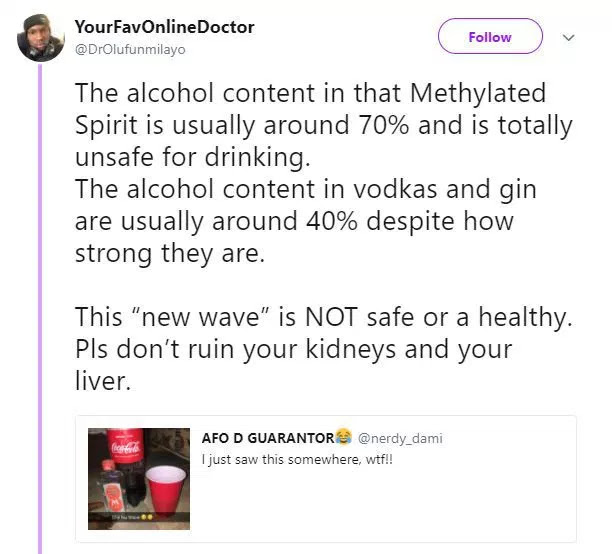 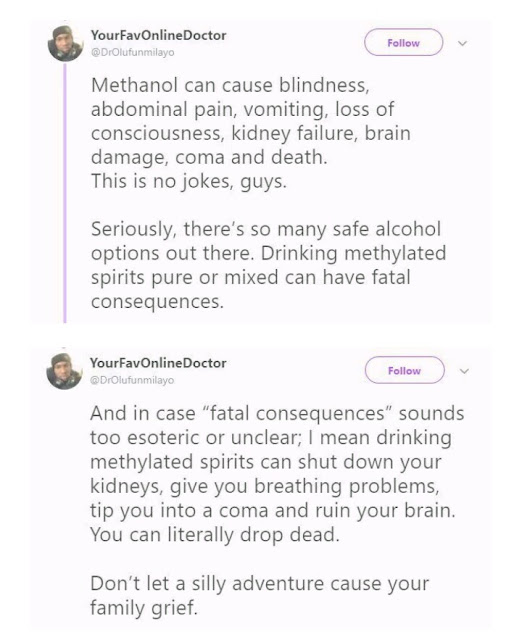 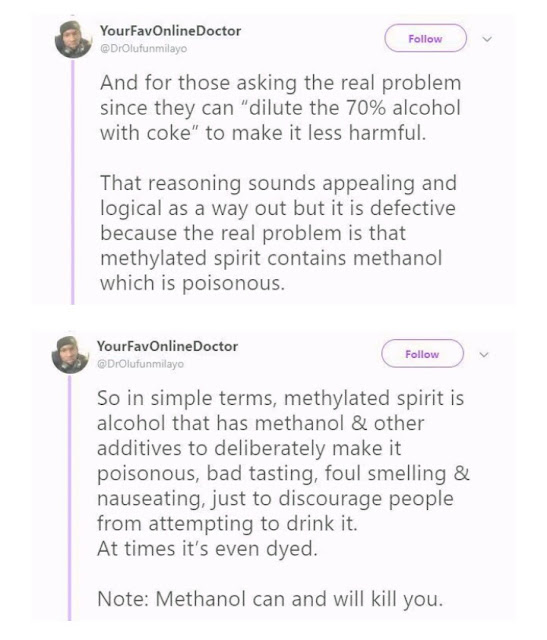