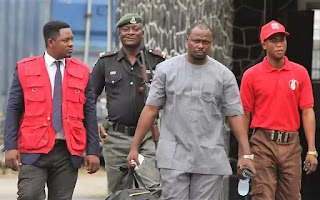 The EFCC has arraigned one Nsa Ayi before the State High Court, Ikeja
– Ayi, a banker, is accused of allegedly diverting the sum of N700million from his customers’ accounts
The Economic and Financial Crimes Commission (EFCC) Lagos Zonal Office, on Monday, February 26, 2018, arraigned one Nsa Ayi before Justice Mojisola Dada of the State High Court sitting in Ikeja, Lagos on an 11-count charge bordering on fraudulent false accounting to the tune of N700, 000, 000.00 (Seven Hundred Million Naira), an offence contrary to Section 335(a) of the Criminal Law of Lagos State of Nigeria, 2011.

The defendant, a former Relationship Officer, Coronation Merchant Bank, allegedly connived with unknown parties to move funds using customers’ electronic instructions meant for investment in the Federal Government of Nigeria (FGN) Bonds, Treasury Bills and Fixed Deposits.
The defendant was also said to have altered instructions and falsified signatures of customers to transfer money into various accounts outside the bank.
The money was allegedly transferred in tranches into the defendant’s Guaranty Trust Bank account No. 0001600855 as well as his Zenith Bank account No. 1002771899.
READ ALSO: Former chief of army Kenneth Minimah refunds N1.7bn to EFCC – Click to read more

PAY ATTENTION: Advertise your business here and Promote Your Good Music, Video, Mixtape on www.9jahitplay.com WhatsApp / Call Us: +2347063030051 – Click to place your advert and promote your Good music

“My Lord, the defendant’s health is very much okay, as he was well fed in the EFCC custody,” the prosecution counsel added.
After listening to both parties, Justice Dada ruled that if the defendant’s son was truly ill and needed medical treatment abroad, the defendant should not be pleading with the court to allow him travel out with his entire family only to treat his son.
“I, therefore, conclude that the defendant is a flight-risk as put before the court by the prosecution.
“There is no guarantee of him coming back to Nigeria, if he had travelled out with his family, despite booking for return tickets,” Justice Dada held.
Consequently, Justice Dada adjourned the case to March 6, 26, 29 and April 16 and 27, 2018 for commencement of trial and remanded the defendant in Kirikiri prison pending the hearing of his bail application.