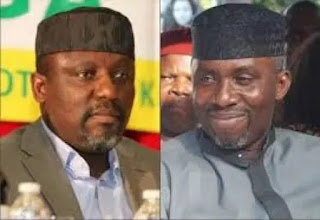 The declaration by Governor Rochas Okorocha’s son in-law, Uche Nwosu, to contest the 2019 gubernatorial election in Imo state is causing tension in the state
– Nwosu reportedly declared his governorship ambition at Nkwerre local government area of the state
– The deputy governor of Imo, Prince Eze Madumere, was said to have insisted that he would run for the governorship position
Son-in-law to Governor Rochas Okorocha of Imo state, Uche Nwosu, has reportedly declared to run for the 2019 gubernatorial election in the state.
Nwosu’s declaration took place at his country home in Eziama Obire, Nkwerre local government area of Imo state, Vanguard reports.
9jahitplay.com gathered that a governorship aspirant, Senator Ifeanyi Araraume, stated that the All Progressives Congress (APC) in the state cannot be under the control of just one man, while the Imo deputy governor, Prince Eze Madumere, reportedly insisted that he would contest for the governorship position.
READ ALSO: Tears as Italian football star Davide Astori dies suddenly aged 31 – Click to read more
Okorocha had earlier stated that he would be contesting for Imo West senatorial district while his son in-law would be contesting for governorship in 2019.
Speaking with supporters at his Destiny Foundation office, Owerri, Senator Araraume said: “No one man owns the party. The party belongs to all of you. And whatever will happen in Imo state, will be decided by you.
“There is no one man, no matter who the person is that owns this party. This party belongs to all of us. You must work hard to ensure that this party is strong in your area. There is no any other party that will win Imo state. Our President will be voted again to continue from 2019. So, no one man will decide what will happen in Imo.
“When they were moving around telling people that they will change our elected executives and I told them that nobody can change our elected executives. That is not democracy, we are not in the period of dictatorship. We have long passed that, it is now history.”