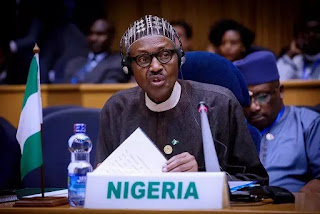 The Federal Government has been accused of trying to cover a huge fraud in the presidency
– This was the opinion of the main opposition Peoples Democratic Party (PDP)
– The party alleged that the recent declarations of the Nigerian National Petroleum Corporation (NNPC) on fuel subsidy were false
The PDP has accused the Federal Government of trying to cover a “huge fraud in the presidency by
“declaring it spends N24 billion monthly (N774 million per day) to subsidise fuel in the country.”
In a statement sent to journalists on Monday, March 5, by the party’s national publicity secretary, Kola Ologbondiya, the party described the figure as “fictitious and cleverly fabricated to retire the already exposed stealing of trillions of naira by the presidency cabal and All Progressives Congress (APC) interests in secret oil deals.”
President Buhari is Nigeria’s minister of petroleum. Photo credit: State House
National Petroleum Corporation (NNPC) to claim a sudden surge in fuel purchase expenses at the same time the nation faced the harshest fuel shortage across the country, with Nigerians paying exorbitantly for the product.
READ ALSO: Protesters block Lagos expressway as BRT bus kills pupil in ikorodu – Click to read more
“The APC-led presidency is drawing its deceptive proclivity and concealment of fraud too far. And to think that such is hatched in a sector that is under the direct supervision of President Muhammadu Buhari as minister of petroleum resources is most disheartening.
“This is the same presidency that claimed to have abolished fuel subsidy payments and even accused the immediate past administration of alleged corruption in its subsidy management. It is, therefore, strange that the same government can pull out unimaginable figures and claim it is the cost of subsidy enjoyed by Nigerians.”
The party further queried: “How come that with such humongous sums, Nigerians are still paying as high as N250 to N300 per litre on fuel in various parts of the country? We have since charged the Buhari-led presidency to come out clear on the administration of subsidy under its watch. The question is, why is the Federal Government cloaking the subsidy regime in secrecy, if not to conceal its duplicity?”
“Nigerians need to know who in the presidency approved the spending of the said N774 million per day as fuel subsidy and who the benefiting companies are. Is the subsidy captured in any appropriation instrument of the National Assembly? What is the cost of landing imported fuel to the depots and at what exchange rate? Where are the details of the subsidy payout and the negotiating options and contracts?
“In reeling out its figures, the presidency has forgotten that Nigerians are still waiting for its explanations on the leaked memo showing alleged corrupt oil contracts at the NNPC to the tune of N9 trillion ($25 billion dollars). The presidency has also refused to offer explanations on the alleged involvement of its officials in various sneaky oil subsidy deals and reported diversion of N1.1 trillion worth of crude, last year, to service APC interests.”