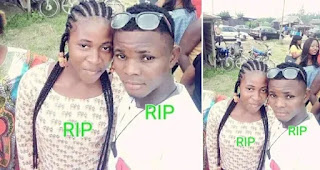 A community in Delta State has been left with total shock following the mysterious death of a young couple. Though investigations have begun over their demise, the cause of the death of the two young lovers is still misty to police authorities.
Local reports have it that the young man and his girlfriend were found dead yesterday morning in the apartment of a friend where they went to sleep in Mosogar, Sapele area of Delta state.
READ ALSO: Some of us that returned have gone back to libya again – Libya returnees cry out – Click to read more
According to Sapele Oghenek, the pair simply identified as Matthew and Bose were said to have gone out to buy Suya on Thursday night before Matthew took Bose to his friend’s house where they went to sleep.
The owner of the house and his girlfriend was said to have slept in the bedroom while Matthew and his girlfriend Bose slept in the sitting room. Their friend was reportedly shocked to have woken up the next morning and discovered that the young lovers had died in the parlor.
Their corpses have been deposited at the mortuary and the owner of the house detained by the police. Many people have said the pair may have died from the Suya they ate the previous night while others are saying they may have died after inhaling generator fumes.
Investigation into the matter is on.

0
Previous post Some of us that returned have gone back to libya again – Libya returnees cry out
Next post Lady who was almost beaten to death by her fiancé, shares her sad heartbreaking story (Photos)
Admin