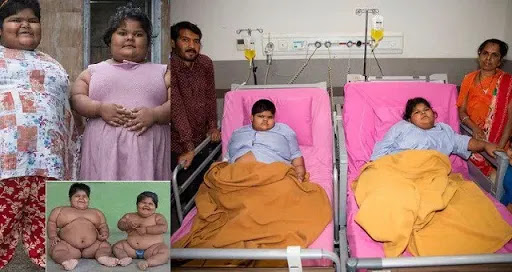 The world’s fattest sisters from India have had gastric bands fitted aged six and eight – because they weighed a humongous 22 stone between them. Yogita Nandwana, eight, and her sister, Amisha, six, used to devour a heavy breakfast of chapatis and six bananas, while they scoffed eight more chapatis with half a kilo of rice and three bowls of curry for lunch – and again for dinner.
They also gorged on six packets of crisps, five packets of biscuits, a litre of milk and a litre of Coca-Cola every single day.
Yogita weighted a massive 59kg at her heaviest while her sister, who is two years younger, was 82kg. 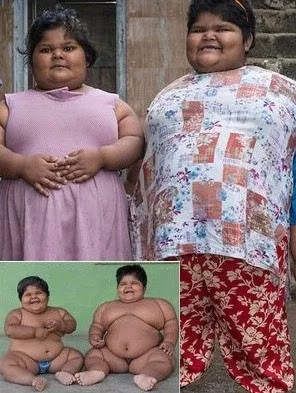 But thanks to the kindness of a surgeon, the girls have had bariatric surgery to help keep their weight and health problems under control.
They have already lost a stone in weight and the breathing problems they suffered from beforehand have already improved.
READ ALSO: Akpororo steps out with his newborn twins for the first time – Click to read more
Their Father,
, 36, from a village in Gujarat, western India, told of how he only earns Rs 3,000 (£35) a month as a labourer, but sometimes had to borrow money to indulge his girls’ constant hunger.
Yogita and Amita first hit international headlines in 2015 when the former weighed 33.6kg and the latter weighed 47kg when they were only aged five and three respectively.
That’s when Rameshbhai (The Father) quickly realised he was in fact hurting his children.
But with no money, he was nearly prepared to sell one of his kidneys to afford medical help for his daughters. 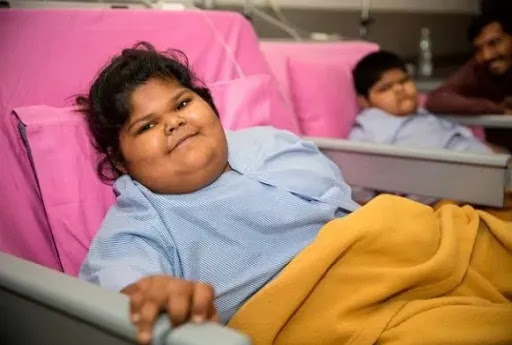 For the next three years the family were sent from one hospital and doctor to another across India, seeking help, but no result or long term weight loss managed to help the girls get healthy.
However, last month Asia’s top bariatric surgeon, Dr Mahendra Narwaria, from Asian Bariatrics Clinic, in Ahmedabad, western India, invited the family for a meeting.
Dr Narwaria promised to help, free of charge, and offered the sisters surgery to reduce their stomachs and long term consultations and guidance on permanent weight loss and a course of hormones and vitamins.