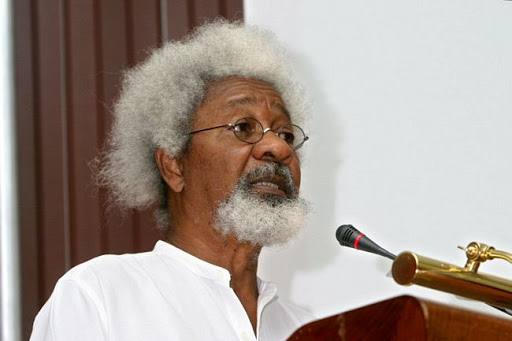 Nobel laureate, Professor Wole Soyinka on Sunday called on Nigerians to be vigilant and beware of a coalition formed by former Nigeria’s President, Olusegun Obasanjo purportedly claiming to be on a rescue mission to salvage the nation, saying that the coalition was formed by people who are enemies of democracy.
Obasanjo had formed the Coalition for Nigeria Movement, which he said was meant to salvage the nation from its present state. He even asked President Muhammadu Buhari not to contest next year’s election as he had failed.
Soyinka, who spoke at the 80 Posthumous Birthday celebration of late legal luminary and activist, Chief Gani Fawehinmi in Ikeja, Lagos, Southwest Nigeria, said Nigerians must be vigilant as democracy was in danger in the country.
The theme of the event is “Democracy for the Masses through Proper and Effective Governance.”
According to Soyinka, “all I have to say in connection with the theme of the event is vigilance. In this society and like others, there are people that whenever they smell anything decaying, they gather just as vulture. The theme of the event is most pertinent and there is no question whatsoever that democracy is in danger. It is not only the country’s democracy, the society is in danger.
READ ALSO: Why we arrested Senator Dino Melaye – Nigerian Immigration Service (NIS)- Click to read more
“The question is, do we see it as an opportunity to do a rescue mission or do we see it as an opportunity to take advantage once again and continue our role, contribution in bringing the nation to its kneel? In other word, it is not new whatsoever that there is need for drastic action to rescue this country as a corporate entity and what I called the conglomeration of protocols that has kept us together which we place under the brick of democracy.
“I find it ironic that those who put themselves, the enemies of democracy, who have really taken the committed act, not just act, negligence; but actually inaugurated certain policies which contributed to our being at this point today are once again coming out and positioning themselves as saviours and messiahs.”
Soyinka, who was apparently referring to Obasanjo and his coalition added that the coalition was trying to present itself as the “sole possible rescue mission that this nation can even dream of, as nation of over 150 million. I found it very strange, because at the beginning of this movement, quote and unquote, rescue mission, there were two organisations that came out under different names. And there were names in there whom I considered worth following and encouraging others.
“The next thing I knew was that the movement was hijacked by the very people who laid the foundation for the collapse of democratic edifice. The next thing we discovered was they were forming coalitions. I was invited by one of the rescue missions to address them. So, I called them asking if they were the original people that I saw or the faction under which everyone is moving. I told them not to come near me. If you sign up to it, you will become one of those who are enemies of democracy in the country.
“They were those who inaugurated the so called, constitutional amendment programme, total charade, basically to assist them continue plan, which had been scuttled, known as tenure elongation, for which the entire national treasury was almost bankrupted.”
Soyinka said these same people had now come forward, forming coalitions to further confuse the people in a bid to find their way back to power.
“Suddenly, they are forming coalition all over the place; confusing people, especially the genuine leaders that we can trust. The answer to that is very simple. You need to look at their track record. Don’t allow yourself to be plunged into a zone of amnesia which one would conveniently forget unpleasant reality.
“We have had President in this country, some of whom inaugurated a never ending process which landed us under one of the most brutal dictator that this nation has ever known. We had others who supervised the sacking of democratic governance. And they called themselves God designated watchmen over the fortune of this nation.
“And suddenly, I see Nigerians flocking to them. They asked them to lead again. Even if they didn’t individually put themselves into power, they are already, smoothing the way, with their surrogate and stooges. All I am urging is that we should all be very vigilant. You can bash the ruling order of the moment. You can demand that you don’t want to wait for the next election.”
Also speaking at the event, human rights lawyer, Femi Falana charged Nigerians to be very very careful not to allow those who ruined the country to “claim that they are saviours of the people.”
Referring to Obasanjo, he said “This man ruled the country cumulatively for 11 and half years, including three years as a military head of state. He wanted to embark on third term before it was scuttled. He claimed to have solution to Nigeria’s problem.
“And that is why I am challenging him to name any of the country’s problems that he solved. He spent $16 billion to generate darkness for the country. This guy formed and took over the resources of the country under what he called blind trust. Nigeria is the only country where the sitting President and his vice established private varsities, refusing to fund the public institutions.”
Prof. Wole Soyinka; Obasanjo and co are enemies of  democracy 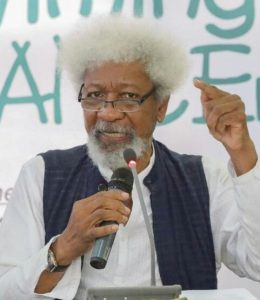