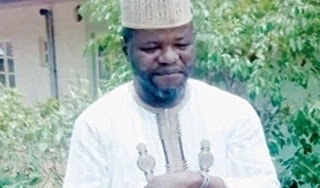 The pictorial image of the Boko Haram member said to be the mastermind of most of the recent attacks in Benue, Aminu Yaminu aka Tarshaku, has been revealed.

Aminu Yaminu aka Tarshaku, is believed to have masterminded the recent deadly attacks in Benue (Photo credit: NAN)

Recall that the Nigerian Army said that it had arrested a key Boko Haram suspect behind the recent killings in Benue state.
READ ALSO: Nigerian Slay Queen allegedly runs mad after she was dropped off from a car in Owerri, then she gets healed by a nearby pastor (Photo) – Click to read more
In a statement issued on Friday, April 27, Assistant Director, Army Public Relations, Major Olabisi Ayeni, said that the arrest was made possible through combined troops of 707 Special Forces Brigade, Nigeria Police and the Department of State Services in Makurdi.
He stated: “Nigerian troops have arrested the key Boko Haram suspect known as Aminu Yaminu nicknamed Tashaku who is believed to have masterminded most of the recent attacks in Benue state.”
He added: “Following an intelligence report, it was gathered that Aminu has concluded plans with his cohorts in Bauchi, Borno, Yobe and Nasarawa states to launch a major attack on innocent citizens in Benue state.”

0
Previous post Must read: Nigerian Slay Queen allegedly runs mad after she was dropped off from a car in Owerri, then she gets healed by a nearby pastor (Photos)
Next post Suspected Imo kidnap kingpin arrested in students’ hostel
Admin