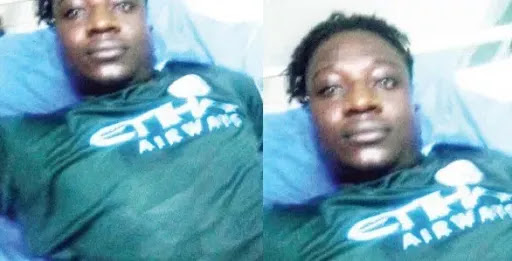 Suspected Imo kidnap kinpin identified as Godwin Onyebuchi, also known as Papa G has been nabbed by the operatives of Federal Special Anti-Robbery Squad of the Imo State Police Command.
He was reportedly arrested in his hideout in a Polytechnic hostel. He is also suspected to be a serial killer.
According to Punch, his arrest made residents of Owerri to jubilate, including police officers who gathered to have a glimpse of him.
Southern City News gathered that the suspect, who had escaped arrests, had been on the wanted list of the police for a long time.
According to a police source, who does not want his name in print, Onyebuchi was nabbed on Saturday at Solo Lodge hostel located around Federal Polytechnic, Nekede.
﻿﻿﻿﻿﻿﻿﻿﻿﻿﻿﻿﻿﻿﻿﻿﻿﻿﻿﻿﻿﻿﻿﻿﻿﻿﻿﻿﻿﻿﻿﻿﻿﻿﻿﻿﻿﻿﻿﻿﻿﻿﻿﻿﻿﻿﻿﻿﻿﻿﻿﻿﻿﻿﻿﻿﻿﻿﻿﻿﻿﻿﻿﻿﻿﻿﻿﻿﻿﻿﻿﻿﻿﻿﻿﻿﻿﻿﻿﻿﻿﻿﻿﻿﻿﻿﻿﻿﻿﻿﻿﻿﻿﻿﻿﻿﻿﻿﻿﻿﻿﻿﻿﻿﻿﻿﻿﻿﻿﻿﻿﻿﻿﻿﻿﻿﻿﻿﻿﻿﻿﻿﻿﻿﻿﻿﻿﻿﻿﻿﻿﻿﻿﻿﻿﻿﻿﻿﻿﻿﻿﻿﻿﻿﻿﻿﻿﻿﻿﻿﻿﻿﻿﻿﻿﻿﻿﻿﻿﻿﻿﻿﻿﻿﻿﻿﻿﻿﻿﻿﻿﻿﻿﻿﻿﻿﻿﻿PAY ATTENTION: Do you want to Get new Customers in Your business or Promote Your Good Music, Video, Mixtape – Click to place your advert and promote your Good music
﻿﻿The hostel, until his arrest, served as his hiding place after deadly operations.
“In order to beat police investigation, he uses that hostel as a hiding place after deadly operations. He pretends to be a student. He knew police were tracking him.
“So, he does not have a phone. He borrows phones to make calls if there were needs for telephone conversation,” the source told Southern City News.
The suspect, the source added, was responsible for the kidnapping of a popular gospel singer, Chinedu Nwadike, and one Rev. Columba Okereke in August 2017.
“In August, 2017, a gang of armed robbers and kidnappers led by Godwin Onyebuchi, who operates between Imo and Abia states, abducted a popular gospel singer, Chinedu Nwadike, and Rev. Columba Okereke.
“ The gang collected the Lexus 350 model car of one of their victims while a ransom of N5m was paid. The hoodlums equally collected other valuables from the victims.
“Acting on intelligence, the operatives of Federal Special Anti Robbery Squad of the Imo State Police Command, led by their commander, SP Victor Godfrey, swooped on him at his hideout, Solo Lodge hostel, Nekede, on Saturday and arrested him. On sighting the F-SARS operatives, he jumped down from the three-storey building and broke one of his legs ,” the source further disclosed.
The suspect was rushed to police clinic, Amakaohia, Owerri, where he was receiving medical attention
It was gathered that two kidnap victims and the suspect’s gang members in the police detention had identified him as the ring leader.
Confirming the arrest, the State Commissioner of Police, Chris Ezike, said the robust onslaught against criminals and their hideout was ongoing in the state.
“The suspect has been on the wanted list of the command. Acting on intelligence, we have to arrest him. He will be ready to answer for all his atrocities. As a command, we will continue to ensure that Imo people enjoy their sleeps,” the state/CP said.