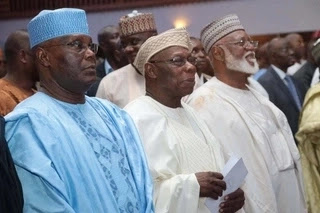 Former president, Chief Olusegun Obasanjo, met with Alhaji Attiku Abubakar in Lagos.
Atiku served as vice president during Obasanjo’s administration from 1999 to 2007. Atiku and his former boss have not enjoyed a cordial relationship since then.
The Cable reports that the duo reunited at the 10th memorial symposium of Abraham Adesanya, a chieftain of the National Democratic Coalition (NADECO). 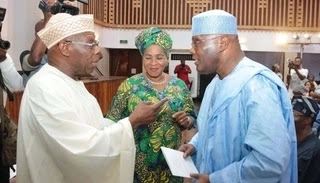 Atiku and Obasanjo in Lagos. Credit: TheCable
The programme took place on Wednesday, May 2, at the Muson Centre, Onikan, Lagos.
They have tried in the past to mend their differences especially ahead of the 2015 general elections but fell out later.
READ ALSO: Kidnapper insists victim is her missing 20-year-old daughter, who has been spiritually reduced to a 2-year-old – Click to read more
In an earlier report, Obasanjo while addressing a group of youths who visited him at his country home Abeokuta on Monday, April 2, , cautioned Nigeria not to be carried away by the Peoples Democratic Party’s recent apologies.
He also said they should not be swayed by the All Progressives Congress’ new reform. The former president asked the ruling party to stop giving excuses to Nigerians.
In response, a Lagos-based lawyer and human rights activist, Festus Keyamo, said the former president used to blame the rot the military left behind as the reason for his abysmal performance and begged Nigerians to be patient with him.
He said: “Let’s remember that during d first 4 years of Obasanjo (1999-2003) he kept blaming d ‘rot’ the military left behind as d reason for his abysmal performance & begged Nigerians to be patient with him. To d extent that he reportedly knelt down 4 Atiku then to get his 2nd-term ticket. “

0
Previous post Kidnapper insists victim is her missing 20-year-old daughter, who has been spiritually reduced to a 2-year-old
Next post Just in: Court denies Senator Dino Melaye bail, remands him in police custody, to spend 5 weeks with the Police (Photo)
Admin