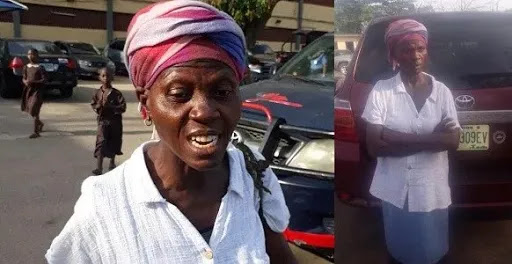 Detectives attached to Yaba Police Division, Wednesday rescued two minors, 10-year-old Mukaila Ya’u and two-year-old Mariam Jubril from their abductor, one Mary Henry.
The suspect, had abducted the two kids along Herbert Macaulay Way, Yaba, while on their way to an errand.
The state Commissioner of Police, Imohimi Edgal, who paraded the suspect before newsmen wednesday evening said the abductor was first noticed by the Yaba Divisional Police Officer, CSP Mary Ubangha, who was on a surveillance duty along Little Road, Yaba.
Edgal said the DPO observed that the middle aged woman who was going along the road appeared worried and restless.
He said: “The DPO observed the woman’s worried countenance and felt that something is amiss. She l decided to trail her. However, the suspect noticed that she was under surveillance and diverted into Saint Dominic Catholic Church, Yaba.
READ ALSO: NIGERIAN RUNS GIRL (PROSTITUTE) WHO CHARGES N40K PER NIGHT NARROWLY ESCAPES FROM BEEN USED FOR RITUALS BY A RITUALIST IN DELTA STATE (PHOTOS) – Click to read more
“The DPO followed her up and warned the church security men to keep an eye on the woman and never allow her exit the church without the police ascertaining her identity and mission to the church.
“The security men obliged and brought the woman and the children before the DPO. During interrogation, the woman gave her name as Mary Vera Henry of No. 6, Akanni Street, Shomolu.
“It was discovered that she was not the biological mother of the children who are of different parents. The names of the children are: Mukaila Ya’u, 10 and Mariam Jubril , 2.
“She claimed that she lost her 20-year-old daughter whom diviners told her had been reduced in size and stature to a 2-year-old child and that the 2-year-old child looked exactly like her missing 20-year-old daughter.
” The woman was arrested and taken to the station for further interrogation. While at the station, the biological parents of the children surfaced and gave their names as:
Jubril Garba, father of the 2-year-old girl and Mukaila Amidu, father of the 10-year-old boy.
“The father of the 10-year-old told the police that he actually sent his son on an errand and that as he was going the 2-year-old girl accompanied him unknown to her parent.
“However, along the road the suspect lured the children away from their course to unknown destination. Investigation into the case is ongoing and effort is on to arrest the fleeing brother of the suspect believed to be a co-conspirator of the crime.”
A visibly angry Edgal, threatened to deal with parents who are in the habit of sending their underaged children to the market unaccompanied.
He said: “With the foregoing, I hereby reiterate my call to parents to keep an eye on their children.
“The Command will not hesitate to arrest negligent parents and prosecute them in accordance with relevant sections of the law, particularly, section 247 and 249 of Criminal Law of Lagos State, 2015.”
Meanwhile, the suspect who pretended to be mad denied the allegation insisting that she was being framed by one Shanta Orji, and one Mama Blessing who she claimed paid some people the sum of N50,000 to rope her in.

One thought on “Kidnapper insists victim is her missing 20-year-old daughter, who has been spiritually reduced to a 2-year-old”