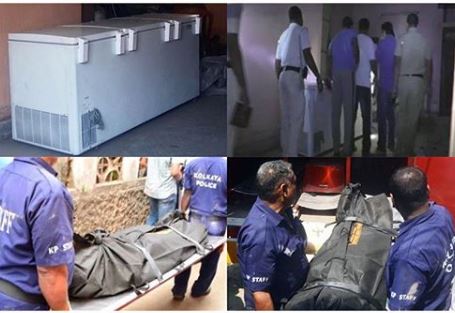 According to reports, In a shocking case from Kolkata, a 43-year-old man was arrested for reportedly keeping the corpse of his dead mother in a deep freezer for almost three years to collect her pension every month using her thumb impression.
The incident came to light after the mutilated body of the woman was found at his home by Kolkata Police on Thursday.
Speaking to The Indian Express, Deputy Commissioner of Police, Nilanjan Biswas said,
“Bina Mazumdar’s body was stored in a refrigerator since 2015. Why her body was stored for three years is being investigated.”
The police told that the accused Subhabrato Mazumdar has been detained and currently being accused. According to police sources, prima facie the lady (87) had died following a cardiac arrest.
READ ALSO:  Court denies Senator Dino Melaye bail, remands him in police custody, to spend 5 weeks with the Police – Click to read more
Reports said Bina was a government employee and had retired from Food Corporation of India. Subhabrato was a student of leather technology and was in the leather supply business. She received a pension of Rs 50,000 every month (N276,994).
His 90-year-old father was also aware of the incident. 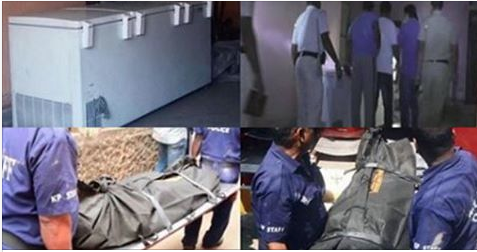 According to the police, during the search operation, they also found a forged living certificate of Beena.
“On Wednesday night after getting information from a source, a police team headed by DC (South-West) Neelanjan Biswas searched Subhabrata’s house and recovered his mother’s body from the deep freezer. The inner parts of the body, like liver, lungs etc were found missing and chemicals were also recovered from the house,” said Behala police official.
The officials further added that the accused was using his dead mother’s thumb impression to withdraw money from her pension account. “We questioned the son and his 90-year-old father who was also aware of the incident. We have arrested the son and he is in police custody.”
A similar case was unearthed in 2015, when police officials found a man in Kolkata’s Robinson Street, living with the rotting corpse of his sister who had died a year back.

0
Previous post Just in: Court denies Senator Dino Melaye bail, remands him in police custody, to spend 5 weeks with the Police (Photo)
Next post Trending: I became tired of women so i bought a sex doll – Check out the first Nigerian musical artiste to invest in buying a sex doll worth N5m
Admin