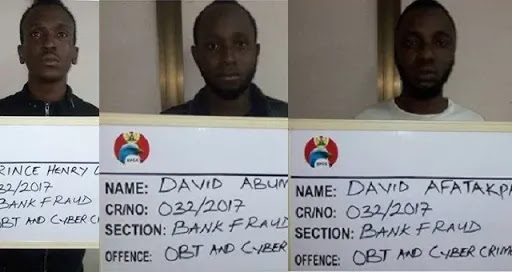 The Benin Zonal Office of the Economic and Financial Crimes Commission, EFCC, has secured the conviction of three fraudsters at the Federal High Court sitting in Benin City, Edo State.
Two of the convicts, Prince Henry Ofeyi and Afatakpa David were convicted and sentenced by Justice P. I. Ajoku on Wednesday April 2 while the third convict, David Abumhere was convicted and sentenced on Thursday April 3, by the same judge. 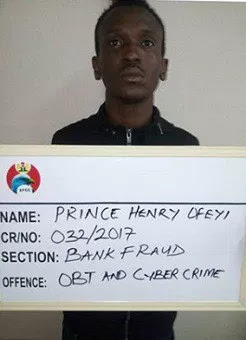 Henry Ofeyi and David Afatakpa were arraigned by the EFCC on a One count charge each bordering on intent to defraud. Prince Henry Ofeyi was said to have on or about the 5th of October, 2017 falsely represented himself to be one Dexter Smith, a false identity he used in defrauding his victims.
For Afatakpa David, he was alleged to have represented himself as Vin Diesel, an American Movie Star on social media platforms, an identity he used to defraud his victims.
READ ALSO: I became tired of women so i bought a sex doll – Check out the first Nigerian musical artiste to invest in buying a sex doll worth N5m – Click to read more
Upon arraignment, the duo pleaded guilty to charge prompting the prosecution counsel, Aso Larry Peter to ask the court to convict the accused persons accordingly. 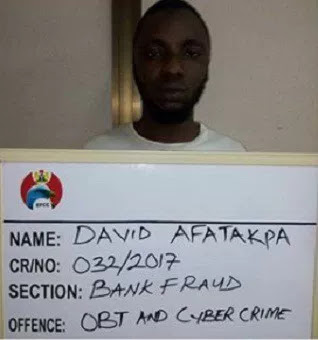 He also told the court that the EFCC recovered from Prince Henry Ofeyi the sum of N400,590.00 (Four Hundred Thousand, Five Hundred and Ninety Naira) only and a Toyota Corolla Saloon car while the sum of N200,342.99 (Two Hundred Thousand, Three Hundred and Fourth Two Naira Ninety Nine Kobo) only was recovered from Akatakpa. D.Tageme.
The defence counsel Moses Oriazowan pleaded with the court to temper justice with mercy saying the accused persons were remorseful and have promised never to go back to such despicable act.
After listening to both counsels, Justice P.I.Ajoku sentenced the accused persons to one month imprisonment each adding that the proceeds of crime be forfeited to the Federal Government so that their victims can be restituted.