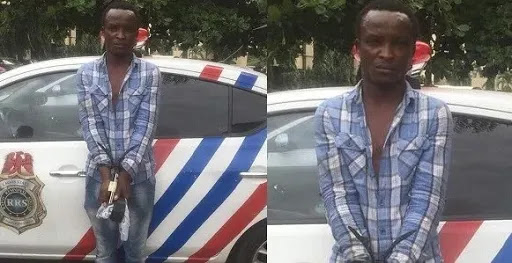 A phone thief arrested by the operatives of the Rapid Response Squad of the Lagos State Police Command, has confessed that he has stolen over 1200 from Lagos commuters since he joined pickpocketing gang.
The suspect, Femi Solomon, from Ogun State, was arrested last Thursday in Iyana Oworo, after stealing a Samsung phone from a commuter in a bus stampede at the bus stop. Solomon, an auto technician noted that he joined pickpocketing gang in Obalende, where he was ushering people to buy used cloth popularly called “Okrika”.
READ ALSO: “You are a disgrace to your family if you are truly dating Wizkid” – Nigerians blasts for Tiwa Savage (Photos) – Click to read more
According to him, one of his customers, Ismaila, who was about 50 years old, “introduced me to pickpocketing. I noticed he was coming to Obalende finely dressed with so much money. I told him I was looking for better job opportunity, and he assured me that he was going to assist me with one. And, when he was going to introduced me to one, he said I should be following him, while I learn from him.
I was following from behind and monitoring what he was doing. We were moving from one bus stop to the other from morning till evening. He was stealing phones and wallets from passengers inside buss and at bus stops. Throughout the six months I followed him, we could pick 6 to 8 phones and wallets from people without them knowing. He kept everything to himself, but at the end of the day, he would give me between N4,000 to N6,000 depending on his wish. 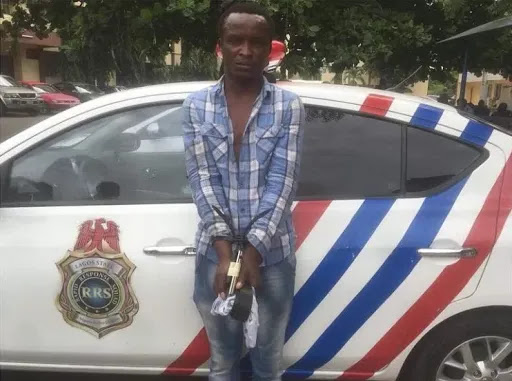 On August 2016, I started on my own. My target is between 4 to 5 mobile phones in a day. Once am able to hit that figure, I stop operation and I retire. I sell phones to a friend based in Lagos Island. In my rough estimation, I would have stolen 1200 phones. I operate on Monday, Tuesdays , Fridays and Saturdays.” Recovered from the suspects were four mobile phones.