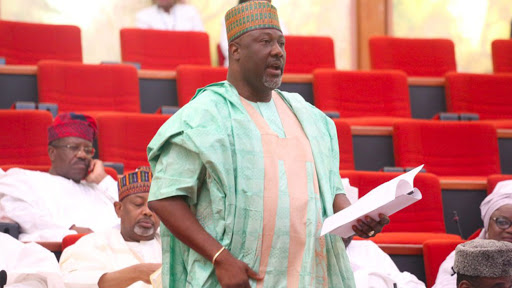 – Senator Dino Melaye has revealed why he jumped out from police vehicle
– Police had last week said that Melaye jumped off of the vehicle in an attempt to evade prosecution
– The lawmaker, however, said he jumped when the police also reneged on their promise of arraigning him before an FCT High Court
The senator representing Kogi west senatorial district, Dino Melaye, on Monday, May 7, said he jumped out of police vehicle conveying him to Lokoja because the tear gas canisters were used on him twice in the vehicle.
Nigerian Tribune reports that the lawmaker in a counter affidavit filed by his counsel, Mike Ozekhome, before a Lokoja High Court, said he jumped when the police also reneged on their promise of arraigning him before an FCT High court.
9jahitplay.com gathered that the court presided over by the chief judge of Kogi state, Justice Nasir Ajana, however, adjourned hearing on the bail application filed by the senator till Thursday, May 10.
The judge said he had to adjourn the hearing to enable him to study the documents that were filed by parties on Monday, May 7.
Counsel to the Inspector General of Police, Alex Izinyon, had in an affidavit supporting his objection to the bail application raised “new and fundamental” issues that warranted the defendants to file a “better and further” affidavit.
The prosecution in the affidavit had objected to the bail application, claiming the Melaye might jump bail if he was eventually granted.
He argued that the objection was based on the action of the senator, who attempted to escape from lawful custody when he jumped from a police vehicle conveying him to Lokoja.
But Ozekhome, who filed a fresh affidavit while the court was sitting, said there was the need to address the new issues raised in the prosecution’s affidavit.
READ ALSO: President Buhari to travel to UK for four days to see his doctor – Click to read more
He, however, pleaded with the trial judge to stand down the case for 30 minutes to enable him to complete the filing processes.
But Izinyon, while reacting to the oral application to stand down the case, said he was just served with the affidavit and he needed time to study it properly.
Justice Ajana in his ruling said in view of the fact that counsels had filed a fresh affidavit which he had not seen, the bail application would be taken on Thursday, May 10.
The senator representing the Bayelsa east constituency, Ben Murray-Bruce, had confirmed that the lawmaker representing Kogi west in the Senate, Dino Melaye, actually jumped from a police vehicle.
Speaking with newsmen over the matter Ozekhome said: “The truth is that the case was adjourned to today for arguments on our bail application and the prosecution led by Alex Iziyon filed their counter affidavit which they served us in the court today. We had to quickly start preparing a better and further affidavit because of the issues they raised in their counter affidavit that is what we are allowed to do in law
“In their counter affidavit, they were raising this issue that Melaye is a kind of person that had jumped out of a moving bus when they were taking to Lokoja. What we have done is to counter that to say that the Police had told him he was being taken to an FCT high court to be arraigned only for them to suddenly veer off going to Lokoja
“According to Melaye, while they were in the vehicle going to Lokoja at the Area1 intersection round about the police tear gassed him two times when he protested as to why they were now taking him to Lokoja instead of Abuja FCT they tear gassed him twice and as soon as the car came to a stand still at the roundabout he forced open the bus door and jumped down because he was now gasping for breadth so that he would not suffocate and the video went viral that they want to kill him by taking to Lokoja.
“Because of that his sympathisers and boys who gathered including his lawyers took him to Zankli Hospital and it was from the hospital that the police again came and bundled him to the National Hospital Abuja where they chained him to the bed like a common criminal. So the question is if someone were to escape from justice would he be in the hospital. So we have to counter this false allegation.
“The national hospital that the chief judge said he should be taken to make two recommendations that this man is an asthmatic patient and has serious spinal cord injury. And that he needs to come back on the 9th for further examination, his national passport has already been deposited.”