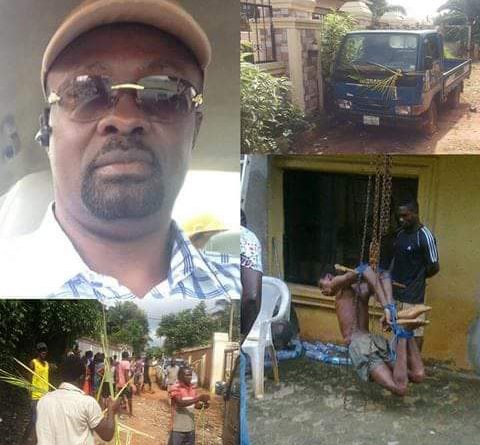 The Police in Anambra State have arrested 52-year-old Christopher Okadigbo of Nando community in Anambra East Local Government Area, and his friend Ameke Udolu, for allegedly killing his octogenarian mother and widow, Mrs Roseline Okadigbo, for ritual purposes.
Parts of the 82-year-old woman’s body – the eye and the heart – were said to have been removed at the time her dead body was found at her apartment in Nando on Wednesday, May 2.
Narrating what happened to newsmen in Nando, the first son of the deceased, Chief Innocent Okadigbo, said he had serious suspicions that his younger brother’s motive was to use their late mother’s remains for a ritual.
According to him, their late mother had reported to him on May 1 what she described as suspicious moves by his younger brother Christopher and his friend Udolu around her apartment earlier on the same day.
READ ALSO: The sad story of how Soldiers tortured ex-serviceman to death and dumped his corpse in the hospital – Click to read more
“My mother told me on phone on May 1, 2018 that my younger brother Christopher came to her apartment with one Ameke Udolu and were moving round making comments that were highly suspicious,” Innocent said, recalling the day before Mrs Okadigbo’s body was found.
“My mother added that she was afraid of staying alone in her house due to the kind of utterances she overheard the duo make while moving round her apartment.
“In the early hours of May 2, 2018, less than 24 hours after my mother’s apprehensive telephone report to me, I received another call from one Pius Aniefule that my mother was found dead in a pool of her blood. Minutes after Aniefule’s call, my brother Christopher, who stopped relating with me since 1999, also called to inform me of the incident, claiming that he traveled to Mina, Niger State from where people at home broke the news to him.”
Corroborating his account, Mr Aniefule said he was the one who raised the alarm that attracted people, an action that led to the arrest of one of the suspects, Udolu.
“I usually charge phone for Mrs Roseline Okadigbo and that morning I went to return the phone I charged for her, and on getting there I saw her lying lifeless and in pool of her blood. I raised alarm which attracted people in the neighborhood and later telephoned her first son Innocent on the gruesome killing of his mother,” Aniefule recounted the gruesome discovery.
“As people rushed to the scene, we saw Ameke Udolu coming out of one of the rooms of late Mrs Roseline Okadigbo’s, and we held him. We collected his phone and uncovered some incriminating telephone communications between Udolu and Christopher, the second son of the deceased.
“We forced him to make a call to Christopher and put it on the speaker, which Christopher did not know; then Christopher told Udolu to hurry down to Nteje junction if he had accomplished the job and wait for him there. On hearing this phone conversation between the two, the irate crowd pounced on Udolu and beat him up. It was the intervention of the president-general of the community and the arrival of security personnel, who later arrested Udolu and Christopher, that saved them from been lynched,” Aniefule said.
Also speaking on the incident, President General of Nando Community Chief Ignatius Aghadinuno said that when he got to the home of the Okadigbos on that day, he met aggrieved villagers who were beating Udolu. He also saw the corpse of the woman.
“Because of the massive beating Udolu was exposed to, I pleaded with the people and subsequently invited security operatives who later arrested Udolu over the act. Christopher was later caught where he was hiding in the home of a native doctor very close to the community before they were handed over to police,” the community head said.
He appealed to police authorities to do a thorough investigation on the matter and to ensure that the perpetrators of the crime are held accountable.
The younger brother to the deceased, Chief Uyammadu Anaeliaku, told newsmen that his nephew Christopher had engaged in fetish practices. Anaeliaku urged the State to assist the family by compelling him to exhume charms he buried around their compound.
“My late sister Rosline gave birth to eleven children; as we speak, only two are alive and at one time or the other Christopher was accused of the deaths of these his late siblings due to his fetish activities,” Anaeliaku narrated.
A source at the police headquarters in Awka said the state police command was already on top of the situation.