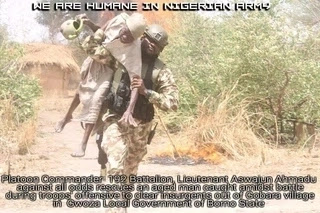 An old man was rescued by a brave soldier in Borno
– This was during a gunfight between the army and Boko Haram terrorists
– 2 terrorists were killed in the confrontation
An aged man has been rescued by a brave soldier during a gunfight between troops of the Nigerian Army and Boko Haram terrorists.
This was contained in a statement by Colonel Onyema Nwachukwu on Monday, May 14.
The incident happened in Gobara village in Borno state where a platoon commander of the 192 Battalion, Lieutenant Asajwun Ahmadu reportedly carried the old man on his shoulder in rescue.
Read the statement below:
Troops of Operation Lafiya Dole have rescued an aged man who was held hostage by element!s of Boko Haram Terrorists group in the remote village of Gobara in Gwoza Local Government Area of Borno state.
READ ALSO: Wizkid’s first Baby Mama, Shola subtly blasts him of being a deadbeat father? – Click to read more
In a rare display of bravery and humaneness, a Platoon Commander of the 192 Battalion, Lieutenant Asajwun Ahmadu rescued and personally carried on his shoulders, the feeble aged man who had been caught up in the exchange of fire between the troops and the insurgents during an offensive to clear insurgents out of their hideout in Gobara on Friday 11 May 2018. The rescued man is currently receiving medical attention at the 192 Battalion Medical Reception Centre.

A soldiers rescued an old man during a gunfight between the army and Boko Haram terrorists. Credit: Facebook, SK Usman

During the advance to conduct the offensive at Gobara, the Counter insurgency troops uncovered and successfully detonated three Improvised Explosive Devices (IEDs) buried by Boko Haram insurgents along the axis of advance at Damboa bridge, Fadakwe and Fadakwe Christian respectively.
In the offensive, the gallant troops killed two insurgents and destroyed their camp, logistics and IED factory during the fire fight . The troops also recovered 8 Dane guns, one G3 Magazine, one IED making device, one Unexploded Ordnance, three Tool boxes, three machetes, Length of electric cable and a Boko Haram flag.
The troops have also exploited further to clear Shiyadawe, Shiyadawe Bulama and Shiyadawe Fulani, all in Gwoza Local Government Area of Borno State.
Meanwhile, an anti-terrorism group said that the dreaded Boko Haram sect operating in northeastern part of Nigeria has been defeated.
The Coalition Against Terrorism and Extremism (CATE) said that contrary to the claim of the United Nations, the Boko Haram terrorists have been defeated across the country.
CATE reacting to reports by the United Nations Special Representative of the secretary general for West Africa and the Sahel (UNOWAS), Mohammed Ibn Chambers, said the reality on ground shows that the sect has lost its hold on Nigeria.
Chambers had earlier said that Boko Haram has not been defeated in the northeast.