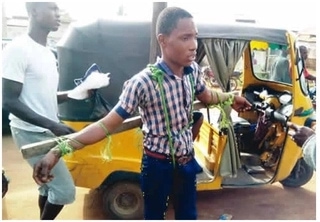 The principal and proprietor of a school in Ogun state have been arrested for tying students to crosses and flogging them for coming late
– A policeman had witnessed the outrageous act and stopped to caution the principal; but was beaten up in the process
– The principal, proprietor and another teacher were eventually arrested, and have been taken to the State Criminal Investigation and Intelligence Department
The proprietor of Metorite Standard School, Ayetoro, Ogun, Afolayan Joseph, was arrested by the state’s Police Command, on Wednesday, May 16, for allegedly tying up two pupils of the school to ‘crosses’ and flogging them with a horsewhip.
Afolayan, together with the school’s principal, who is yet to be identified, allegedly tied up the students because they came late to school, Punch reports.
READ ALSO: OMG! Property developer jailed for 2,670 years for N25m scam – Click to read more
Naijahitplay learnt that a policeman, identified only as Livinus, was also beaten up after he had cautioned the men against such action.

A male student, pictured tied to a cross (Photo credit: Punch)
The policeman, assisted by other residents, eventually succeeded in effecting the arrest of the suspects, who were then taken to the Itele Police Station.
Narrating the incident, the policeman stated: “I was going to work this morning (Wednesday) when I saw some cars parked by the roadside. I discovered that it was because of some pupils that were tied to crosses.
“When I saw it, I parked and went to meet the proprietor of the school. I introduced myself as a policeman and told him to untie the pupils. He refused, saying there was nothing anybody could tell him that would make him to release them.
“When I tried to untie the pupils, the proprietor and his teachers beat me up. Before I returned from picking handcuffs from my car, they had grabbed a friend who was with me, Omaje Iremi, and beaten him up with a horsewhip.
“I entered the school – with the help of some neighbours who gathered around – to arrest him, but he refused to follow me. I then called the divisional police officer of the Itele Police Station and he sent some policemen to the school, who took everybody to the station.”

A female student also received similar treatment (Photo credit: Punch)
The aforementioned DPO, reportedly stated that the proprietor did not take kindly to the fact that the policeman had attempted to correct him.
The arrest of the principal, proprietor and another teacher at the school, was confirmed by the state police public relations officer, ASP Abimbola Oyeyemi.
He stated: “They have been arrested and will be taken to the State Criminal Investigation and Intelligence Department.
“The act is no longer a corrective measure; it is a barbaric act and it will not be allowed in this 21st century.”
previously violence erupted in Ibadan, following allegations that a secondary school principal flogged his student to death .
The turbulence began when a head teacher allegedly flogged a student to death at IMG secondary school, Oke Ado, Ibadan.
According to an eyewitness, the student was flogged for arriving at school after classes had begun for the day.