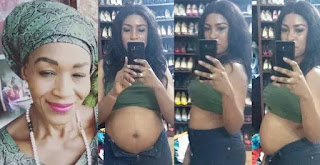 Kemi Olunloyo has again fired back at Linda Ikeji, and she is still insisting the Billionaire Blogger isn’t still pregnant. 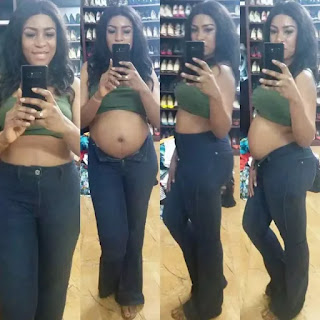 Linda Ikeji reacted by sharing photos of her bare baby bump while addressing some other issues to quench the claims. But it appears that Kemi is not backing down and instead she has made new videos and shared some photos on social media to further buttress her claims.
READ ALSO: Police arrest 73 year old man for forcefully impregnating a 14-year old girl in lagos – Click to read more
The journalist revealed that Linda is not pregnant and that the baby bump she flaunted while not putting on any top is fake. According to her, such baby bump is called moonbump. 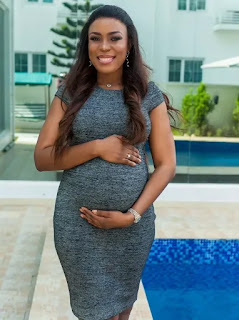 She spoke of how she has details of the receipt of the moonbump Linda Ikeji purchased and that she’s getting her information from a certain Mary Ann, a friend to Laura (Ikeji).
Kemi Olunloyo wrote:
”#lindaisnotpregnant
@officiallindaikeji What’s my business? I’m an entertainment reporter of 10 years out of my 24yrs in journalism.
Public figures have no private lives. U blogged gossip about people & that got you on CNN, @hnnamanda even did a post congratulating u. PLS don’t do back and forth with me darling. I specifically closed this topic last nite. Had to open a can of worms
.
LINDA STOP!!
Stop parading your fake bump on SM. Tell ur fans the truth and educate them. This is the only thing I despise about you. You don’t educate them, share knowledge and teach blogging. Like you said to #Charlyboy you want to “have it all” TO YOURSELF abi?
Stop gifting an unborn baby a Bentley. Be discreet with certain things. Most of ur fans have not eaten today. My fans fed me today, I went to the supermarket on Facebook @hnnafrica.
I have no money, suffering from a mental illness called #PTSD caused by my wrongful abduction, attempted assassination and imprisonment just for doing my work.
On top of that my passport which is directly tied to my job still seized by a federal judge who has not dropped the case on his side because someone “wants to confess.”
Linda honey you are a STAR!! and that’s why I promote you, announced your 100k donation to my travel legal fund, called Larry page to drop a volcano on Google Nigeria to reinstate your blog at midnight and even talked to producers at CNN secretly to profile you.
I want more #HNNWomenNG to conquer out there. Pathetic lying is a mental disease. You can buy anything today EXCEPT integrity. Sadly most of your fans are illiterates. Many are on my page today laying curses.
I won’t curse them back. I’m a daughter of Sango the God of Thunder. Our third Alaafin of Oyo. Struck by lightning twice and I’m still alive, when you lay a curse on me, it goes directly to the one you are fighting for. Linda remember #AngelaOkorie who said I will die soon? Look what Sango did to her.
She was almost killed on her birthday by armed robbers. Call your fans to order. This mental disorder I’m battling does something unusual to me. It makes me spill too much truth. I need to get away from Nigeria soon. God Bless ”

For a final blow, Kemi cursed Linda.. Calling her unprintable names. Read what she wrote below:
#lindaisnotpregnant
People STOP spreading lies Wale Gates! I should start listing who donated what. Stupid dumb fool.
A MESSAGE FOR #LINDAIKEJI @officialLindaikeji I was trying to promote your stupid ass by announcing your N100k. Idiotic moron. Punch called me telling me that you sent me 100k while I was “languishing” in prison. When I came out the first time, Dumo gave me 850k, Miriam and Halima gave me 200k each and the list goes on.
People don’t want me to criticize you because you donated to me. That’s what ruined Nigeria. You can’t report about certain personalities because they are sacred. I will continue to expose your lies.
May God paralyze your livelihood and everything you lay your hands on like they did mine for telling Punch that wicked statement and may you and your family members languish in prison some day.
The last time I cursed you is when you destroyed Adeola’s wedding sleeping with Dan two weeks before the wedding, snatched DBanj from Uche and lied that she was sleeping with Ikechukwu. I told you that you will never marry or have kids. It is now catching up. You need to apologize for that rubbish.
Send me your account details to return your ritual money. People are in my twitter DM telling me you allegedly used your womb for rituals to get super rich, others saying you allegedly slept around to get money to build your empire.
Regardless you gave me a mere 100K AND I DON’T APPRECIATE IT. TAKE IT BACK you homewrecker preaching celibacy. MAY YOU BE SERIOUSLY DISGRACED WHEN YOUR MOONBUMP FALLS OFF LIKE BEYONCE.