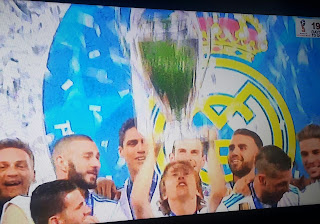 Bale’s second half brace hands Real Madrid a 3-1 win over Liverpool
Real Madrid have once again been crowned champions of Europe as they defeated Liverpool in the Champions League final by 3-1. 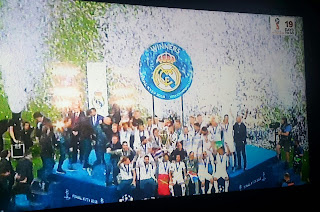 90+3′ A fan runs into the field to attack Ronaldo as the stewards timely intervention stopped the ragging fan. Referee blows the whistle and Real Madrid are champions gain.

90+1′ Three additional minutes added to the regulation time as Liverpool have to score two goals within this time.

90′ Mane wns a free kick on the left side of the flank after being fouled by Nacho.

85′ The Welshman surges into the box again but a timely intervention gifts Real Madrid a corner.

83′ Another bizarre moment for Liverpool as Bale shoots from 25-yards anf the ball was too to handle for Carius.

82′ Mane is the first man to be cautioned after rolling a challenge on Ramos.

78′ Liverpool covering their lines properly as they avoid a Madrid counter attack.

76′ Liverpool are the team in the hurry as time is running out on them. Real try to sustain the pressure.

74′ Real attacks as Ronaldo is one-on-one with Carius but Robertson slides in with the vital tackle that keeps the Portuguese from pulling the trigger.

70′ Mane collects from the throw and shoots as Navas gets his finger tips into it as the ball hits the upright for a Liverpool corner. Navas comes and collect from the corner.

70′ Liverpool with the corner but Navas punches out for a throw.

67′ Real boiling with confidence as they have scored one crazy goal and one extra ordinary goal.

66′ Liverpool have another mountain to climb as they push for an equalizer. They have to show great character.

61′ SUBSTITUTION! Gareth Bale comes on for the Spanish midfielder.

60′ Karius pulls a fantastic save from Isco as Zidane decides it was his last touch of the ball.

60′ Real Madrid control possession as try to pass the ball around in the Liverpool goal-mouth.

58′ Liverpool have been driven on by Adrenalin as the livelier of the sides.

56′ Mane pounces on an initial header from Loveren as he diverts the ball off Navas to put the Reds level.

54′ Juregn Klopp not happy with the way his team conceded as his team look to respond.

52′ It is such an unsatisfactory was for Liverpool to concede in the Champions League final.

51′ Benzema scores a bizzare goal. Karius tries to serve the ball as the Frenchman man stretches his leg and the ball rolls into the net.

49′ The corner taken but as the ball cleared away. Real Madrid showing their experience over the resilient English side.

46′ Second half begins as Real Madrid starts the match from left to right.

45+3′ Casemiro and Firmino involved in a clash of heads. The referee has seen enough injuries as he ends the first 45 minutes.

45+2′ Benzema tries his luck from range as it goes wide for a Liverpool goal kick.

45+2′ Marcelo teases Arnold but the young defender shows none of it as he clears for a Madrid corner.

45′ Benzema floats a diagonal cross in the box as Nacho hits it first time but the ball rams into the side-netting.

43′ Real scores but referee’s assistant rules it offside. Ronaldo heads as Carius saves and Benzema pounces on the rebound, the replay shows he was clearly offside.

42′ Both teams are cheaply losing possession to each other. One from Ronaldo and another from Lallana.

40′ A short corner as Real tries to bring Liverpool out of the box. Meanwhile, the camera picks Carvajal who walks into the dressing room in despair.

38′ Madrid in full control of possession as all Liverpool players fall behind the ball. Modric wins their first corner

36′ SUBSTITUTION! Nacho comes in as the match restarts.

35′ Dani Carvajal is also in tears as a late tackle clips his heels and he can not continue. Dramatic scenes in Kiev as you can not afford to miss any minute of this blockbuster match.

32′ Good build up play from Real as Marcelo drives in a cross from the left but a cluster of red shirts surround Ronaldo and Benzema as the ball is cleared.

30′ SUBSTITUTION! Salah can not continue as Adam Lallana is brought on. Not good news for the Merseyside club. The Red Egyptian could not hold back his emotion as cries uncontrollably.

28′ Mane drives in and wins a corner. The Senegalese has been Liverpool’s best player on the night posing series of threats on the Madrid defence.

26′ Salah receives treatment after he was policed by Ramos but he gets back on his feet.

24′ Trent Alexander-Arnold directs a shot on target as he tries his luck, but the Navas saves it.

22′ Milner tackles Carvajal hard as the Spanish defender was at the receiving end of it.

20′ Another dangerous move from Real Madrid but Isco has been ruled off side for the second time in the match.

18′ Liverpool wins a corner and the resulting kick meets Van Dijk but he could not direct his header on target. Goal kick for Madrid.

17′ Isco dances and caresses with Marcelo as he sends a cross into the box to find Ronaldo but Alexander-Arnold heads clear.
15′ Ronaldo breaks lose on the right as he dashes into the box and shoots but the ball whiskers off target.

14′ Ping-pong football in the box as Salah, Firmino’s shot blocked by Ramos and Varane as they clear the danger.

13′ Los Blancos gradually getting into the game but Mane forces an error from Casemiro as they gain control again.

11′ Marcelo makes his Real’s first attempt at goal as it went wide for a Liverpool goal kick.

7′ Through ball from Firmino to Mane but Varane and Navas comes out to defend. Another through into Madrid’s box but Navas again saves.

5′ Salah wins a free kick in a promising position for Liverpool following a challenge from Ramos but headed away.

4′ Liverpool in control of the match as Alexander-Arnold drills in a cross in but Madrid defence steady.

3′ Nice possession football from Real Madrid but a cross from Carvajal finds Isco in an offside position. What a match we are having in our hands.

1′ Salah immediately finds Mane in the box but Varane was the quicker as he intercepts the ball with a timely challenge. Liverpool showing no respect to the champions.

0
Previous post So sad: South African Mother of two stabbed to death by her boyfriend for breaking up with him (Photos)
Next post Shock as Unknown gunmen assassinate Benue traditional ruler
Admin