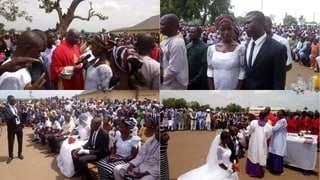 – Four homeless couples recently got married at the Daudu Internally Displaced Persons (IDP)’s camp in Benue state
They found love at the camp after several attacks on their homes by herdsmen
The couples were joined in holy matrimony by priests who visited the camp to perform the ceremony
Four couples residing at the at Daudu Internally Displaced Persons (IDP) camp in Benue state recently walked down the aisle in a beautiful ceremony held at the camp.

The love birds found love at the camp after they were sent there following series of herdsmen attacks on their communities.
READ ALSO: Fans react as Tiwa Savage flashes Naked butt in ripped bum shorts at Wizkid’s concert – Click to read more
Recall that months ago, a certain couple who were engaged to be married before their homes were invaded by insurgents and both were forced to flee are now married.
The newlyweds were reunited in the refugee camp after being separated for a while. “I was worried when he was not here. … But the very [day I] saw him in the camp, I was very happy,” said Hauna.
“I had to hold her to my cheek. … Heaven was very close to me that day,” said Ibrahim of their reunion. The bride and groom say they plan to start a family, not minding the difficulties they are likely to face.

We wish the newly weds a happy married life