In recent times, cases of police and army officers assaulting innocent Nigerians were reported that but their irrational act is yet to be curbed by the government.
A young man identified as Franklin Chigozie Odika on Monday, May 28, took to his Facebook profile to share pictures of a serving corps member who was shot dead by a naval officer in Imo state.
Odika disclosed that his late friend Amadi Chukwuemeka Princewill died on Saturday, May 26. Following his friend’s death, Odika disclosed that the naval officer who committed the crime at a local joint is currently on the run. 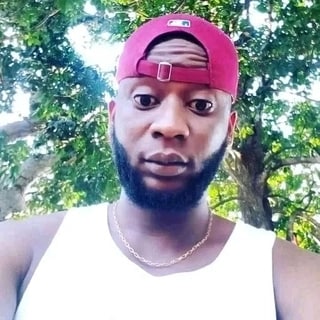 READ ALSO: Police arrest three men for exhuming, beheading 7-year-old girl in Adamawa – Clic to read more
According to his Facebook post, he also urged Nigerians to help search for the naval officer. His post reads:

“Amadi Chukwuemeka Princewill, a serving corps member and a native of Awaka in Imo state. On Saturday being May 26, he went on a sit out with his friends, one Mr Nick Anyanwu (current community chairman at Ndegbelu community in Awaka Imo state and also a re-election aspirant) came to the sit out spot with a naval officer and started harassing them (Princewill Amadi and friends) all in d name of political power. Amadi Chukwuemeka Princewill who has been away for the 3 weeks orientation camp prior to NYSC proper tried to inquire what the problem was, but the naval officer faced him squarely and started harassing him in particular. On seeing that his attacker is a uniformed man, Chukwuemeka tried walking out and the naval officer dragged him backed, beat him up mercilessly and shot him on the chest. This same naval officer took him to the hospital (Holy Rosary Hospital Emekuku) dumped him there and ran away. As it stands now, the navy officer and the man aspiring for the post of chairmanship are at large. Please let us get #justiceforprincewilll #justiceforchukwuemeka#justiceforsleek. Let the search for Mr Nick Anyanwu, current chairman and aspiring chairman of Ndegbelu community in Awaka Imo state begin.”
See post below: 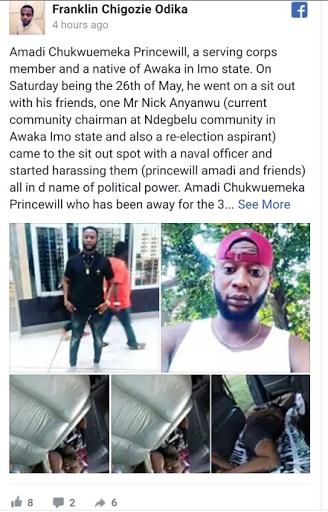