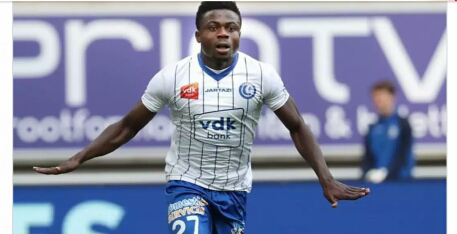 – Nigeria international Moses Simon has been ruled out of the 2018 World Cup in Russia
He sustained an injury while training with the Super Eagles team in Uyo, Akwa Ibom state

Super Eagles’ preparation for the 2018 World Cup has been hit with a blow following the injury of winger Moses Simon who will not be part of the squad that will fly to Russia.

Moses Simon who currently plays for Belgian Pro League club KAA Gent was said to have suffered an injury last week Thursday in training in Uyo, Akwa Ibom state.
READ ALSO: OMG: Police arrest three men for exhuming, beheading 7-year-old girl in Adamawa – Clic to read more
The 22-year-old had a scan on Saturday, May 27, in Port Harcourt in which he is expected to be ruled out of action for at least three weeks
Super Eagles coach Gernot Rohr told reporters in Port Harcourt that Moses Simon is out of the 2018 World Cup in Russia. 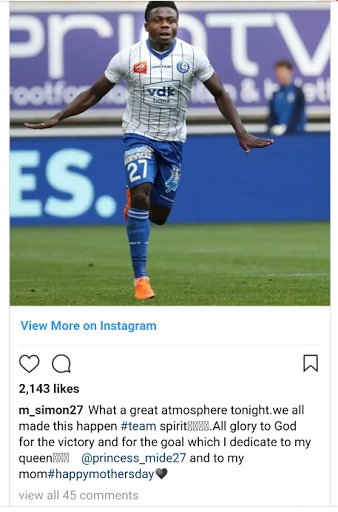 “Unfortunately, Moses is injured and our medical staff told me that it at least three or four weeks he is out which means that it is confirmed that he will be out of the World Cup.” Rohr told reporters in Port Harcourt ahead of the friendly match with DR Congo.

The news of Moses Simon out of the World Cup will be a setback for the Super Eagles considering how good the player is on the wing.

Born on July 12, 1995, Moses Daddy-Ajala Simon is a product of the famed GBS Academy, the same football academy in Nigeria that produced the likes of Ahmed Musa.

He received his first call-up by coach Daniel Amokachi in March 2015 and made his debut on the 25th of the same month in an international friendly against Uganda.

5 thoughts on “Sports: Heartbreak for Nigeria as Super Eagles star suffers severe injury and will miss 2018 World Cup in Russia”