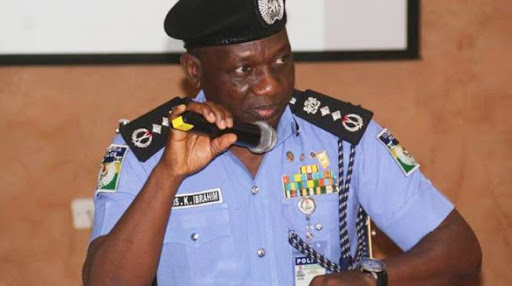 There is a new turn of events in the face off between Senate President Bukola Saraki and Idris Ibrahim, inspector-general of
police ( IGP ).
On Sunday, the police had invited Saraki for interrogation over his alleged involvement in the Offa robbery where 33 persons, including pregnant women and 12 police officers were killed.
Ayodele Akinnibosun aka AY, leader of the robbery gang, while being paraded on Sunday, said they were “ political thugs” working for the senate president. He, however, added that Saraki was not in the know of the Offa robbery.
Saraki who, in May, had alleged that the IGP was planning to set him up by altering statements of robbery suspects, said he was ready to honour the police invitation.
With a newly released WhatsApp conversation, purportedly, with the IGP and dated 2017, Victor Uwajeh, a private investigator, said the IGP had been desperate since 2017 to frame up the senate president.
READ ALSO: Married man who defiled 5-yr-old girl, over 3 times, arrested in Port Harcourt, Rivers State – Click to read more
“We need more details on Saraki,” the IGP was said to have written in one of the exchanges. And, responding to a message calling on him to fight “these people,” the IGP replied, “let me get that of Saraki urgently today. We will later organise that of Missau when I get to Nigeria tomorrow.”
Uwajeh said the IGP has a grand plot to disgrace Saraki.
“It is important that truth must be told so that impunity by the inspector-general of police is put in check,” Uwajeh wrote.
Andy Uba, a senator from Anambra and Isa Misau, a senator from Bauchi, were among those mentioned in the conversation between Uwajeh and Idris.
Jimoh Moshood, the police spokesman, neither answered call nor responded to message seeking his reaction on the matter.
Uwajeh could not also be reached as he did not reply an email sent on Tuesday evening.
Below is a screenshot of their conversation: 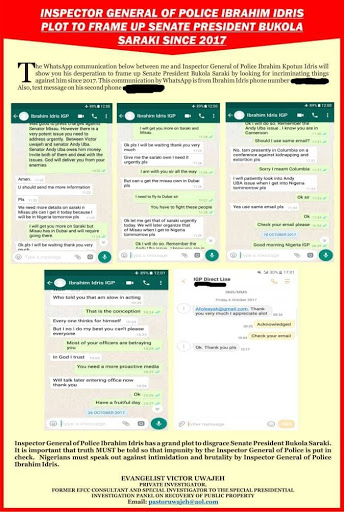