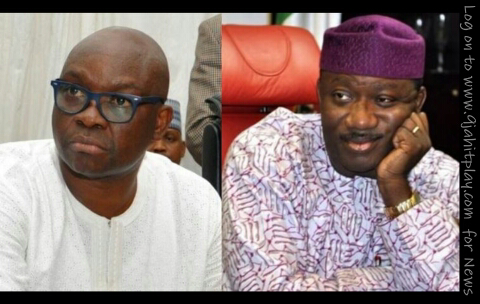 The flag-bearer for the All Progressives Congress in Ekiti state has broken his silence since the shooting at the party’s Secretariat on Friday, June 1

– Kayode Fayemi said he escaped death by the whiskers

The past minister of mines and steel, Kayode Fayemi, has reacted to the shooting at the All progressives Congress secretariat in Ado Ekiti on Friday, June 1.

Breaking his silence since the incident which he escaped death by the whiskers, Fayemi said he would have been killed if not for God’s intervention.
READ ALSO: Private investigator releases Whatsapp chat of IGP ‘plotting to nail Senate President Bukola Saraki’ (Photo) – Click to read more
Tribune reports that the APC gubernatorial candidate for Ekiti while, visiting Adedayo Adeyeye said: “We thank God that we are alive. What do you think would have happened if Governor Akeredolu, Adeyeye, Bamidele and I had died?”

It was possible for the bullets to have hit and killed all of us, but we thank God.

“We pray that God just prevented it. The unprecedented crowd we saw at Ikere Ekiti and how people were rushing out shows that Ekiti people were determined to fight a liberation war against Governor Fayose,” the former minister said.

He added that the forthcoming July 14 election in Ekiti state would bring an end to the leadership of the incumbent governor, Ayodele Fayose in the state.

Further speaking on Adeyeye’s defection from the Peoples Democratic Party (PDP) to APC, Fayemi said the former’s parting ways with Fayose would help the reclamation struggle against the present governor.

He also said the APC would work hard across the 177 wards in the state to ensure that PDP is uprooted in Ekiti.

“Let me assure you that we are all equal in APC, there is nothing called defectors. We are going to reward people on how they deliver their wards and units,” Fayemi said.

Also speaking, Adeyeye said he decided to join the APC because the party nominated a good person like Fayemi as its candidate.

He added that: “As we speak today, Fayose is alone. He has no credible leader behind him. He is empty and naked and this coming election will expose his weakness.”

One thought on “I escaped death by the whiskers – Fayemi speaks after Ekiti shooting, says Fayose’s reign to end July 14”