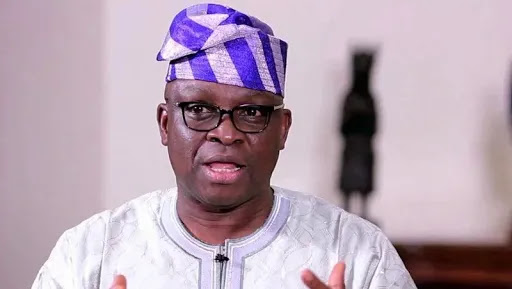 Ekiti State Governor, Mr. Ayodele Fayose has described call by the
federal government through the Minister of Defense, Mansur Dan-Ali for
the suspension of the implementation of the anti-grazing law by States
as an affront on federalism and everything that it stands for, saying;
“It is amazing that at the level of the presidency, they still see the
States as appendages of the federal government.
READ ALSO:I escaped death by the whiskers – Fayemi speaks after Ekiti shooting, says Fayose’s reign to end July 14 – Click to read more
Governor Fayose, who said it was the rights of the House of Assembly
of the federating units in the country to make laws for the smooth
running of their States, declared that there was no going back on the
implementation of the anti-grazing law in Ekiti State, it is the
Presidency and its cabal that should stop looking the other way while
herdsmen go about killing Nigerians.”

Special Assistant to the governor on Public Communications and New
Media, Lere Olayinka, quoted the governor as saying in a statement
issued on Wednesday that “the President Muhammadu Buhari led federal
government is acting as if there is more to its opposition to the ban
on open grazing by some States than it is telling Nigerians.”

He lamented that it was unfortunate that the federal government was
acting as if it values cows more than Nigerians, describing the
position of the Minister of Defense as an embarrassment to the
country.

The governor said “those who are genuinely interested in peace and
unity of Nigeria know that anti-grazing law is not responsible for
killings across the country by herdsmen because herdsmen have killed
more people even in States where the law is not in existence. Rather,
it is the federal government’s refusal to act decisively on pure
security issues that has emboldened the killer herdsmen to even go
about attacking military formations and police stations.

“It is also interesting that this same federal government told
Nigerians last year that most of the herdsmen carrying out attacks
across Nigeria are foreigners. Is the Minister of Defense telling
States to suspend their laws in the interest of foreigners that are
killing Nigerians?”

Governor Fayose expressed concern over the federal government’s
opposition to the anti-grazing law saying; “In January, this same
Minister of Defense blamed the passage of anti-open grazing law in
some states as the cause of the recent killings by herdsmen in some of
the states. Yesterday again after a security meeting with President
Buhari, the Defense Minister was still singing the same song. Is there
something to this old system of nomadic cattle rearing that they are
not telling Nigerians?

“Methinks the federal government should be concerned about how to take
the herdsmen out of the bush and give them decent life by embracing
cattle ranching. How can anyone be pleased subjecting his own people
to a life of following cows through the bush from Yobe to Lagos?

“Why is President Buhari not rearing his cows through open grazing? At
least, we have seen pictures of the President’s cows where they were
kept on a fenced-land in Daura, why can’t other cattle farmers be
encouraged to ranch their cows just like the President?

“Here in Ekiti, the law restricting open grazing of animals stays. It
is the federal government that should stop looking the other way while
herdsmen go about killing Nigerians.”

One thought on “Just in: Fayose slams FG over call for suspension of anti-grazing law, Says “No going back on implementation in Ekiti””