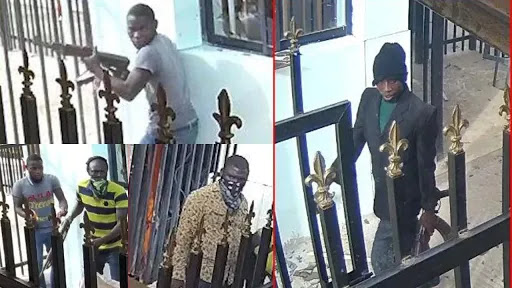 The move, according to the police, will enable them in the investigations for the recovery of firearms used in the robbery

The Nigeria Police Force has moved the key suspects of the April 5, 2018, Offa bank robbery from the police headquarters in Abuja back to the southwest to enable the recovery of firearms used in the deadly robbery.

According to a report by The Punch, the gang leaders have also revealed to the police five hideouts where this firearms are hidden in Kwara, Ondo, Osun, Oyo and Ekiti states.
Naijahitplay gathers that those moved to the southwest for the firearms recovery are Ayoade Akinnibosun, Ibukunle Ogunleye, Adeola Abraham, Salawudeen Azeez, Niyi Ogundiran, Kunle Ogunleye, 35, a.k.a Arrow, and Michael Adikwu.
READ ALSO: Husband Cheating on his Wife Get Stuck While Having Sex With Landlady (Video) – Click to read more
A source who spoke to the press said the gang leaders are assisting police by leading them to places where the firearms are being kept.

The source said: “We announced during the press briefing in Abuja that we had arrested 22 suspects and we paraded 15 while seven suspects are helping us in the investigation and recovery of arms in the Southwest.

Police spokesperson, Jimoh Moshood, is yet to comment on this

0
Previous post Husband Cheating on his Wife Get Stuck While Having Sex With Landlady (Video)
Next post Lesson to all women: See Leaked nude Pictures that made the Nigerian Us based married woman jumped into the lagos lagoon
Admin