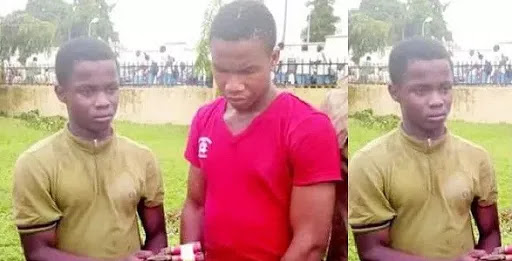 The Imo State Commissioner of Police, Mr Dasuki Galandanchi, on Tuesday paraded two teenagers, Emmanuel Ewudo, and Chinwe Nwaane, (15), and 23 others for attempted robbery, kidnapping and burglary.
Parading the suspects, the police boss said the command would charge them to court after investigation.
However, one of the suspects, Ewudo pleaded for leniency, adding that they attempted the crime because they were trying to raise funds to register for the West Africa Certificate Examination.
READ ALSO: OMG! Psycho dad slits his 4-yr-old daughter’s throat to use as Ramadan sacrificehis – Click to read more
He said:
“Please help us beg the police not to kill us, we are sorry for breaking into somebody’s house, we were trying to raise funds to register for the West Africa Certificate Examination.”
The boys, who are students of Bishop Shina-Hand College in Orlu, said that their quest to pay for the WACE fees led them into crime.
PAY ATTENTION: Check out the biggest musical dinner concert in Africa “THE VOCAL GANG” – Click to read more
Galandanchi said the duo broke into the residence of one Mrs. Chigozie Ohajiogu in Akokwa, Ideato North Local Government Area of Imo State with the intent to rob her.
Her cry, according to Galandanchi, made the suspects to flee, adding that they returned in about 45 minutes later but escaped being arrested by policemen that had come to secure the area. He said they were nabbed in their school.
The other suspect, Nwaane, said ;
Yes we are students. My father has been bedridden and in hospital and unable to pay my WAEC fees, I begged my friend to accompany me somewhere. We went to rob the woman but we were not successful.
“We were caught one day after. We are very scared, we don’t want to be killed but we know that it is wrong to break into somebody’s house.”

0
Previous post OMG! Psycho dad slits his 4-yr-old daughter’s throat to use as Ramadan sacrifice
Next post Nigerian Lady exposes Pastor on Facebook who cursed her for refusing to date him
Admin