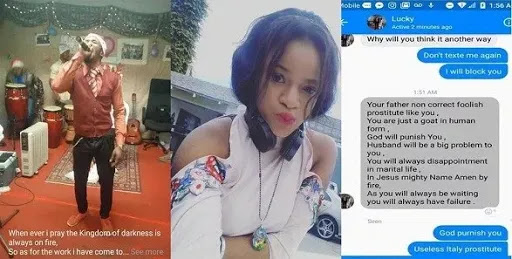 A young Nigerian lady identified as Cynthia Onyinye Okafor has exposed a Pastor on Facebook who insulted her for refusing gto date him.
The lady alleged that the man rained curses on her.
The young lady identified the pastor as Lucky Emmanuel. 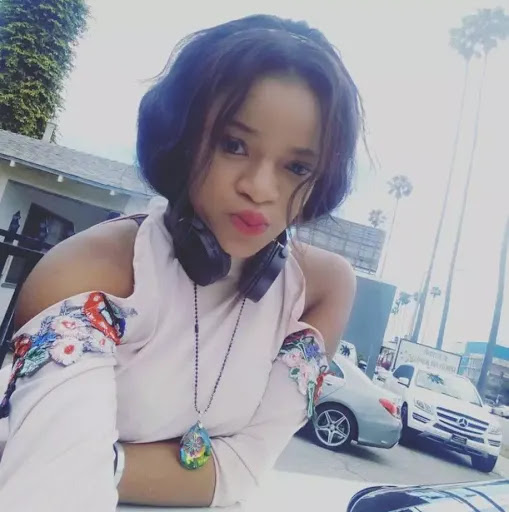 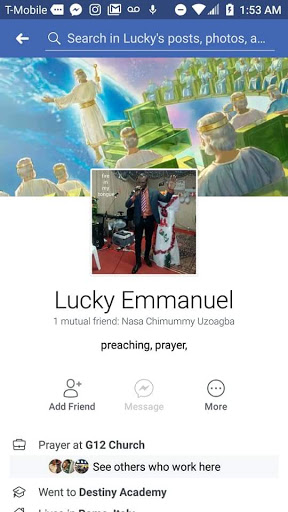 According to her, the pastor is also dating one of her friends who had already confided in her about her relationship with the pastor.
READ ALSO: Up and coming Teenage robbers begs police for mercy after being caught in Imo state (Photo) – Click to read more
Okafor shared a screenshot revealing how the alleged pastor rained curses on her after she told him no. 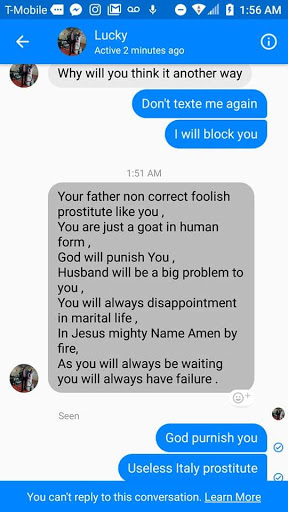 In the screenshot, the angry pastor had told the girl that she would have problems finding a husband to marry her.
On the Facebook post, she advised people to be careful of where they decide to worship because of how some pastors behave.
PAY ATTENTION: Check out the biggest musical dinner concert in Africa “THE VOCAL GANG” – Click to read more
Read what she posted on her timeline below: 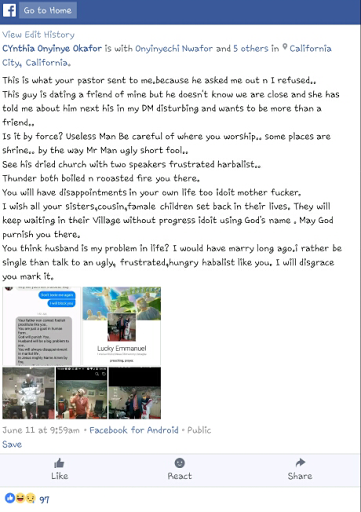 “This is what your pastor sent to me.because he asked me out n I refused.. This guy is dating a friend of mine but he doesn’t know we are close and she has told me about him next his in my DM disturbing and wants to be more than a friend..
Is it by force? Useless Man Be careful of where you worship.. some places are shrine.. by the way Mr Man ugly short fool.. See his dried church with two speakers frustrated herbalist.. Thunder both boiled n roasted fire you there. You will have disappointments in your own life too idiot mother f*cker.
I wish all your sisters,cousin, female children set back in their lives. They will keep waiting in their Village without progress idiot using God’s name . May God punish you there. You think husband is my problem in life? I would have marry long ago.i rather be single than talk to an ugly, frustrated,hungry herbalist like you. I will disgrace you mark it.”

0
Previous post Just in: Up and coming Teenage robbers begs police for mercy after being caught in Imo state (Photo)
Next post Naijahitplay | Free intrumental BabeOnTheBeat – NoBody ( Wizkid Kind Of Beat )
Admin