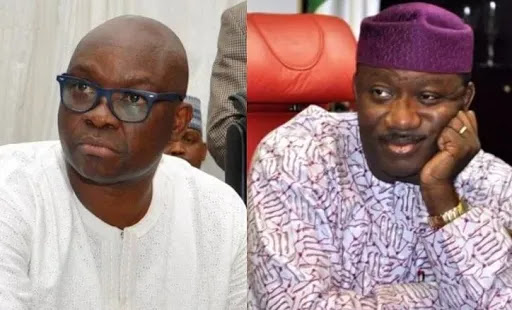 The Elections Transparency Group (ETG) has carpeted the All
Progressives Congress governorship candidate in Ekiti State, Dr.
Kayode Fayemi, for boasting that the State Governor, Mr. Ayodele
Fayose will be caged during the July 14 election.

Fayemi had said during his campaign rally yesterday that “We will
ensure adequate security for voters on election day because if you are
not well protected, the election will not be free, far, credible,
transparent, genuine and acceptable. Fayose cannot threaten or
intimidate anybody on the day of election. Fayose will only be allowed
to cast his vote and he will go back to his house in Afao.”

Reacting, the ETG, in a statement in Abuja on Friday, and signed by
its National Coordinator, Alhaji Kazeem Adekunle, described the
statement as reckless and capable of casting aspersion on the
electoral process.

The group said it was wrong for Fayemi, who is a candidate like many
others to have spoken as if he was the Inspector General of Police or
the INEC chairman.

The ETG, which called on INEC and the security agencies to clear the
air on the statement, asked when it became the duty of a candidate in
an election to personalize the conduct of an election as if he is in
charge of the election.

That statement; ‘We will ensure adequate security for voters on
election day’ is saying that Fayemi is directly in charge of the
deployment of security personnel for the election and if that is true,
the credibility of the election is already compromised.

We therefore call on the international community, especially the
United States and the European Union to take note of comments from
Fayemi, who is the candidate of the ruling party so as to safeguard
the integrity of the election and by extension, democracy in Nigeria.

One thought on “Ekiti Election: Abuja Group carpets Fayemi for saying Fayose will be caged on election day”