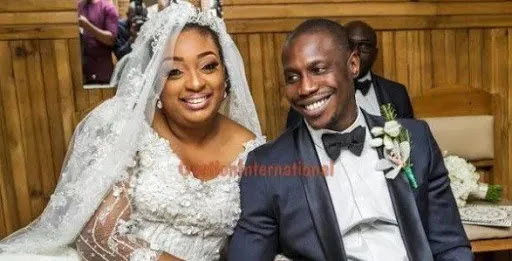 Wife of Olujonwo Obasanjo, son of Former President Olusegun Obasanjo, who is also a magistrate in Ogun state has filed a counter-affidavit in court.
Olujonwo had approached an Igbosere Magistrate’s Court in Lagos, saying that shortly after the wedding ceremony, he suffered from physical assaults by his wife as well as threats from his wife, adding that he has had to leave his matrimonial home as he feared for his life. He called on the court to intervene and help prevent further attacks.
In this counter-affidavit, Tope refuted allegations of assault against her, while accusing Olujonwo of cheating on her, saying he hasn’t agreed to consummate their marriage.

She alleged that she was lonely at their honeymoon destination for five days while Olujonwo was in a Lagos hotel “in the company of other women”.
According to Jonwo’s wife, the couple never experienced marital bliss. She revealed to have never been loved by her husband. Not only was Tope abandoned during their honeymoon in Monaco, her husband allegedly spent his time with other women while she waited for him to arrive since they did not travel together.
Not only that, she revealed his penchant for abandoning not only their home but their matrimonial bed which he barely slept.
“He was not close enough to me to consummate our marriage, which remains unconsummated as he maintained the constant habit of despising and distancing himself from me despite several efforts I made to endear myself to him.”
She added, “The Applicant (Jonwo) has always meted emotional and psychological hardship on me through the act of abandoning me in his father’s house where he kept me and rendering himself incommunicado during the period of desertion without giving me any reasonable or justifiable explanations upon his return.”
Denying exhibiting any form of violence to her husband, Baba Ijebu’s daughter revealed Chief Obasanjo’s son was allegedly a drug addict who is currently undergoing rehabilitation at a private hospital.
Recall that Jonwo’s mother, a former wife of Chief Olusegun Obasanjo, Taiwo, had in 2017 raised the alarm over what she claimed would be the evil consequences of their son, Jonwo Obasanjo marrying Tope.
She also dragged Obasanjo and Adebutu to court to stop the wedding. Taiwo was ignored and the wedding took place amidst pomp on May 11-13 respectively in Lagos.
“My mother-in-law continues to attack, ridicule and defame me with the aim of destroying my career and frustrating my marriage to the Applicant (Jonwo)” Tope also stated about Taiwo Obasanjo.
Debunking many of Jonwo’s claims in his previous affidavit, here is a screenshot of Adebutu-Obasanjo’s counter-affidavit: 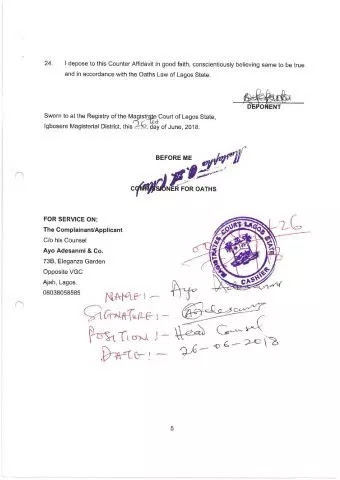 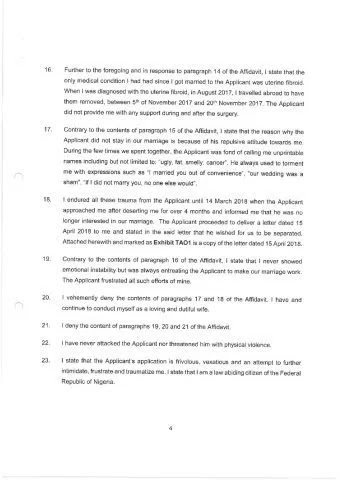