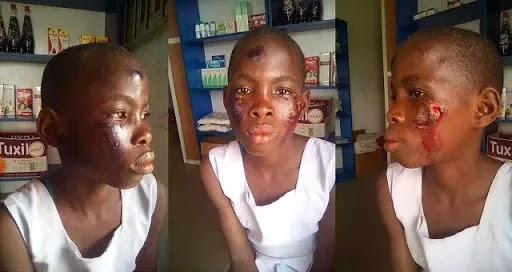 A 10-year-old girl who has been identified Udeme Usen Etukudoh, has been badly dealt with by her mum.
The young girl may now have been scarred for life after her mother burnt her face with electric iron for allegedly stealing N200.
The incident happened yesterday in Ikot Ekang Itam, Uruan Local Government Area of Akwa Ibom State.
A report by an NGO, Child’s Right and Rehabilitation Network (CRARN) exposed the development. 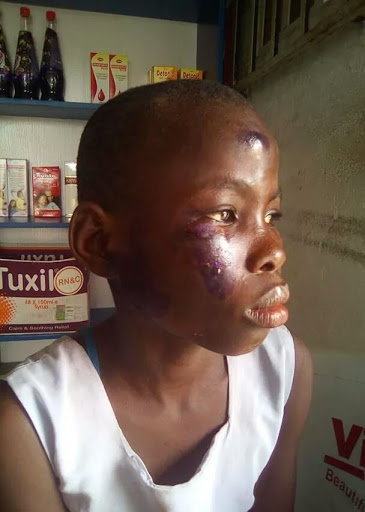 Read below:
Early Thursday, I met ten-year-old Udeme Usen Etukudoh, an indigene of Ikot Ekang Itam, being treated for burns and a deep cut on her face at a small pharmacy along Calabar/Itu Road. Upon inquiry, I learned that Udeme was severely abused by her own mother for “stealing N200”, the sum which is less than a dollar.

READ ALSO: I will not welcome President Buhari when he visits Ekiti – Governor Fayose – Click to read more

Udeme, a Primary 5 pupil of RCM School, near Itam Police Divisional Headquarters, said her mother, because of the missing N200, pushed the plug of an electric iron into an electrical socket and further applied the extremely hot device on parts of her body. The burnings later disfigured her face. Not satisfied with the burns, the girl said her mother used a short wood to hit and tear open her right chin just by her eye. Her mother, Aniedi Etim Akpan (according to the little girl), had gone out for petty trading at the popular Itam market as of the time I visited their house to make findings. Udeme’s stepfather, whose name could not be ascertained at the time of checks, and a woman who said she was the little girl’s elder sister, said that the missing money was stolen by Udeme, and that she deserved the burns dealt on her as “punishment”.
But the little girl, who lives with her mother and stepfather, denied stealing the money. She said anytime money gets missing from her step father’s pocket or house, the theft would be attributed to her. She said she was innocent of the accusation. Upon further inquiry, Udeme led me to her biological father, Usen Okon Etukudoh, a bricklayer who lives just close to where his daughter lives with her mother. Usen said Udeme had opted to stay with her mother, Aniedi, after their separation some years back, but that he would stab his former wife with a broken bottle if anything happens to his daughter. 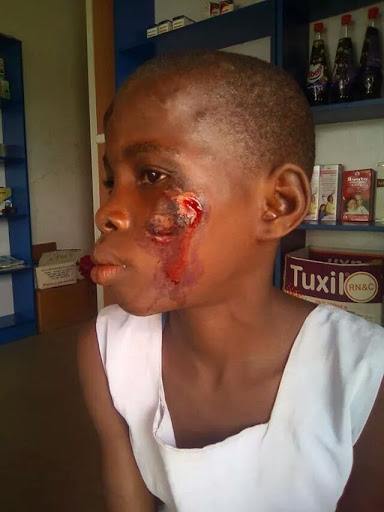 As at 11.30 am, Udeme, dressed in her school uniform, had not taken breakfast when I met her at the pharmacy. To show the extent of trauma the little girl went through, the step-father who took her to the pharmacy shop rejected the bill of N4,000 he was asked to pay for the child’s emergency treatment. He wanted to pay N2,000 instead. I had to buy a loaf of bread and Coca-Cola so that she could eat something before being administered with what the pharmacy attendant called “inflammatory injection” to stop the pain. Two things are likely to happen to the child if her father decides to let her stay continuously with her mother (as I later told him): it is either that she leaves the house (to God knows where) in order to be free from torture or she gets killed secretly by her mother and stepfather. God help the hapless child!