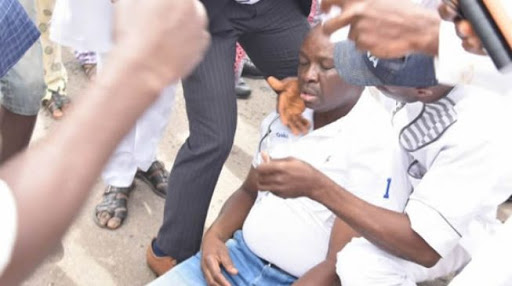 Failure of Governor Ayodele Fayose to settle the drivers he called to park their vehicles in the Government House to cause traffic difficulty for APC members during their mega rally yesterday has sparked violence between the drivers and the governor’s aides.

One of the drivers union leaders, Kamoru Ojuolape,  who stormed the Government House this morning to demand for the money promised them, said they were angry because the governor failed to pay  them N10,000 he promised them for parking their vehicles overnight in order to disrupt transportation system to hurt APC rally.

He said the drivers became unruly when they discovered that some parts of their vehicles had been stolen. Requests to see the governor were turned down while some of the aides of the governor blasted the drivers who responded by throwing punches.

Some of the governor’s aides joined the fray, which further drew the anger of other drivers.

Minutes later, the picture of the governor who was nowhere near the scene appeared on social media that he was tear gased by the police.

The police have invited the leaders of the drivers to the police headquarters to settle the matter.

Shortly afterwards, Fayose appeared with neck collar on television claiming that the police wanted to kill him over Saturday election.

NaijahitplayA few hours ago,  it came to our notice that armed policemen hadinvaded the Ekiti State House of Assembly complex...

NaijahitplayEkiti State Government has challenged the governor-elect, Dr. KayodeFayemi to begin his probe of the Ayodele Fayose led government nowinstead...

NaijahitplayEkiti State Governor, Ayo Fayose, on Wednesday raised the alarm over aerial surveillance of the Government House, Ado-Ekiti by a...

NaijahitplayINEC welcomes PDP’s threat to challenge result of Ekiti election- INEC says the result of the Ekiti gubernatorial election was...

Naijahitplay LEADERSHIP - Coalition of observer groups and Civil Society Organisations that observed and monitored the Saturday July 14 the  ...