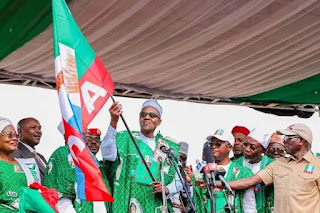 The Independent National Electoral Commission (INEC) has warned candidates and political parties not to start campaigns yet.
The chairman of the commission, Mahmood Yakubu, made this known on Monday in his speech at the workshop for election professionals from the Commonwealth Africa Region organised by the Commonwealth in partnership with the commission.
“Let me also remind political patties and candidates that the end of primaries does not mean the immediate commencement of campaigns. Section 99(1) prohibits campaigns by political parties earlier than 90 days before polling day,” he said.
Going by the provisions of the Electoral Act and the Timetable and Schedule of Activities issued by the commission, campaign for Presidential and National Assembly elections should commence on November 18 while Governorship and State Assembly elections should start on December 1.
Mr Yakubu called for strict adherence to this timetable by political parties and candidates.
The electoral chief’s warning follows the conclusion of presidential and governorship primaries by parties and adoption of candidates.
Some of the presidential candidates who have emerged are Muhammadu Buhari of the All Progressives Congress (APC), Atiku Abubakar of the People’s Democratic Party (PDP), Donald Duke of the Social Democratic Party (SDP), Omoyele Sowore of African Action Congress (AAC), Fela Durotoye of Alliance for New Nigeria (ANN), Tope Fasua of the Abundance Nigeria Renewal Party (ANRP), Obiageli Ezekwesili of the Allied Congress Party of Nigeria (ACPN) amongst many others.
The commission also announced the dates for the submission of lists of candidates by political parties.
“May I seize this opportunity to remind political parties that the dates for the submission of list of candidates and the dates (Form CFOO2) and their personal particulars (Forms C1001) for presidential and National Assemby elections is October 10 to 18, 2018 while governorship and state assembly elections is 22 October to 2 November 2018,” Mr Yakubu said.
The commission said it will receive the submission from political parties at Aso Hall of the International Conference Centre, Abuja, from 9.00 a.m. to 4.00 p.m. daily.
Noting the commission has communicated these dates to all political parties, the chairman reiterated there will be no extension of time.
In making the submissions to the commission, Mr Yakubu said covering letters as well as the list of candidates must be duly signed by the national chairmen and national secretaries of political patties in line with the commission’s guidelines.
The workshop themed “Strengthening Electoral Democracy in the Commonwealth African Region” is the second of its kind. The maiden edition was hosted by the Republic of Botswana in 2015. 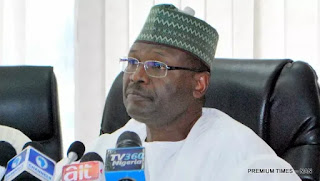 Appreciating the commonwealth for the choice of Nigeria to host this workshop, INEC said it is an indication that the Commonwealth is taking notice of the progressive improvement in the electoral process.
Mr Mahmood said this is significant because today all the countries of the Commonwealth Africa Region are democracies conducting periodic elections, but need to further consolidate on the process so that elections are not merely periodic but also peaceful and credible.