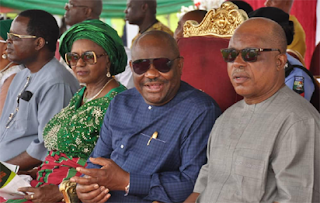 Speaking at the Government House Port Harcourt on Sunday during a Special Thanksgiving Service for the successful hosting of 2018 PDP National Convention, Governor Wike declared that at the convention he promoted the candidature of Sokoto State Governor, Rt Hon Aminu Tambuwal , but accepts the choice of the party as the way forward.
He said: “I supported the Sokoto State Governor, Aminu Tambuwal fully. I have no regrets for my support for Tambuwal.

“But the party has made a choice and as a loyal party man, I stand by the choice of the party. I will support His Excellency, Atiku Abubakar to victory in 2019. That is what is called party loyalty “.

Governor Wike stated that APC is a hopeless that has failed Nigeria, pointing out that the all Nigerians must work diligently towards sacking the Buhari administration.