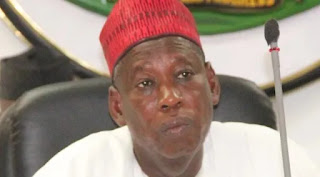 Kano State Governor, Abdullahi Ganduje, has appeared in a video clip allegedly receiving bribe amounting to about $5million from contractors in the state.

Contractors told DAILY NIGERIAN that the governor personally receives between 15 to 25 per cent kickbacks for every project executed in the state.

The sting operation to capture the governor on camera was said to have began two years ago when one of the contractors agreed to plant spy camera on his kaftan lapel while offering the bribe.

About $5m dollars were said to be delivered to the governor in all.

One of the contractors who preferred not to be named, was reported as saying the reason he released the footage was to expose corruption and bring sanity to the country.

“If my aim is to blackmail or extort the governor, I would have used the videos to get over a billion settlement or force the governor to pay the hundreds of millions of naira the state is owing my company or force him to pay back all the money I paid him as kickbacks,” he said.

“We believe if public office holders are exposed, there will be sanity in the system even if I will not be the beneficiary in future.”

The Kano government has however claimed that the video was cloned.

“We wish to state that there is no iota of truth to these allegations and if indeed there is any such alleged video, it is at best cloned,” the Kano state commissioner for information, Muhammad Garba, said in a statement.

“The government of Kano state is taking this matter seriously, and will exploit every appropriate and legal avenue to ensure that it gets to the root of the matter and the perpetrators are brought to book.”

0
Previous post We shall support Atiku Abubakar to victory in 2019 Election – Rivers State Governor Wike
Next post 2019 election: I don’t belong to any political party “I have never taken any dime from any political candidate” – Bishop Oyedepo
Admin