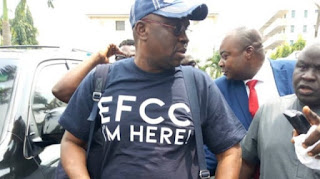 Fayose must account for his choice property in Abuja, Lagos —EFCC …Charge him to court —South West PDP

DETAINED former Governor of Ekiti State, Ayodele Fayose, has reportedly refused to cooperate with the Economic and Financial Crimes Commission, EFCC, operatives interrogating him over alleged graft while he held sway as governor between 2014 and October 16, 2018 and dared the agency to charge him to court.
In the main, the anti-graft agency wants Fayose, who turned in himself on Tuesday afternoon and was promptly detained, to speak up on the N4.7 billion, which he allegedly received from the Office of the National Security Adviser, and where he got money to buy property in choice locations in Abuja and Lagos worth billions of Naira.
A top source in the anti-graft agency told Vanguard last night that the former governor was unwilling to provide answers to questions put to him by his interrogators, a development that had infuriated the agency.
“It is true that Fayose is not cooperating with our teams interrogating him contrary to his boisterous appearance when he came here on Tuesday with hordes of supporters and other political elements. It is shocking to us that a man, who had boasted that he was willing to talk and clear his name when he arrived Abuja is not ready to speak up and clear his image.
“Many of the teams raised to interface with him have tried their best to make Fayose to talk but to no avail,” a senior official confirmed on Wednesday night.
however we learned that the EFCC on Wednesday shocked Fayose by presenting to him pictures of all the choice property, which he allegedly used the sum of N1.3 billion out of the N4.7 billion ONSA cash in upscale areas of Lagos and Abuja.
A source narrated that when confronted with the pictures of the houses, which EFCC agents took, Fayose kept mute and simply stared at his interrogators.
“Notwithstanding his grandstanding, we have presented to him the pictures of the houses, which are suspected to have been bought with the proceeds of crime. We will present them to court when the case opens,” the official said.
Fayose was said to have insisted that he would not speak further to the anti-graft agents until he was taken to court to ‘prove his innocence’.
Naijahitplay gathered that the EFCC would hasten the process of charging Fayose to court to prevent a situation whereby he would resort to delay tactics once he gets out of its facility.
“We are making arrangements to charge him to court any moment from now,” another EFCC official said.
We could not however establish how soon the former governor would be arraigned. It was gathered that EFCC had assembled its witnesses including bank officials, some of his business associates and politicians, who had had business dealings with him.
It was also not clear at press time last night if he would be freed and on what terms.
One of the witnesses would likely be former Defence Minister, Musiilu  Obanikoro, who allegedly conveyed the huge cash from Abuja to Akure Airport for onward delivery to Fayose.
Some of Fayose’s aides have been interrogated and they have made some statements to the EFCC.
Meanwhile, the Peoples Democratic Party, PDP, in the South-West, yesterday, asked the EFCC  to charge Fayose to court arguing that the failure to do so would mean that the present administration was out to use “the EFCC to intimidate, harass and punish him in the most unjust manner.”
In a statement by its Zonal Publicity Secretary, Mr. Ayo Fadaka, the South-West PDP said Fayose has been held incommunicado for 48 hours after submitting himself to the anti-graft agency.
Fadaka said: “We note with concern that the EFCC continues to hold in its custody immediate past Governor of Ekiti State, Mr. Fayose who submitted himself to the commission on Tuesday.”

0
Previous post All Mentally challenged persons evacuated from the streets of Anambra State (Photos)-9jahitplay.com
Next post Breaking: Serious Fight Happening Right Now In Lagos..bewear Of This Areas It’s A No Go Area
Admin