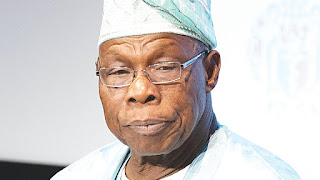 Ex-President, Olusegun Obasanjo, in a recent interview with titled the “The Talk” with “Voice of the People”, revealed that he does not know the leadership position of Ex-governor and APC leader, Bola Ahmed Tinubu.

In the interview, monitored by PoliticsNGR, the former President had been asked to identify the designations of certain political figures in the country.

He identified Muhammadu Buhari and Prof. Yemi Osinbajo as the President and Vice President respectively, while he also identified Senator Bukola Saraki as the Senate President.

When asked to identify Tinubu, he said, “Oh, Bola? Bola is supposed to be the leader of the APC. I don’t know the position of his leadership as you and I are talking.”

0
Previous post We are taking steps to enforce Fayose fundamental rights,EFCC has no right to keep him for over 24 hours _ Ozekhome
Next post Just in: EFCC moves Fayose to Federal High Court in Lagos for trial
Admin