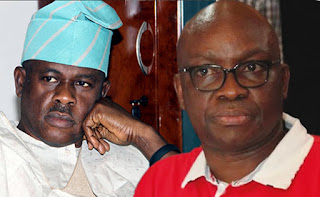 Information reaching the PoliticsNGR newsdesk today reveals that Former Minister, Musliu Obanikoro has reportedly traveled to the US, a few days before the court case of Former Ekiti state governor, Ayo Fayose is set to commence.

Obanikoro, who was listed by the Economic and Financial Crimes Commission, EFCC to testify against Fayose left the country last Wednesday for Medical treatment an did not specify a date of return.

A former Minister of State for Defence, Obanikoro, traveled shortly after he retrieved his passports from the EFCC.

This is despite a directive by the Federal Government that 50 persons under investigations for fraud exceeding N50m are restricted from travelling.

Obanikoro, who has an American passport and a Nigerian one, reportedly met certain conditions before his passports were returned to him.

Obanikoro has been under investigation since 2016 for allegedly receiving N4.7bn from the embattled former National Security Adviser, Col. Sambo Dasuki (retd.), in 2014.

The former minister allegedly handed over about N1.3bn to former Governor Ayodele Fayose of Ekiti State and another N1.3bn to the then Peoples Democratic Party governorship candidate in Osun State in 2014, Senator Iyiola Omisore.

After Fayose was arrested by the EFCC last Tuesday, however, it was learnt that Obanikoro traveled to the US.

The former minister, who has defected to the All Progressives Congress, had declared his intention to run for the Lagos West senatorial district election but shelved his ambition at the last minute.