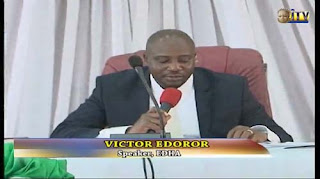 The Edo House of Assembly on Monday impeached the Deputy speaker, Victor Edoror over alleged “corruption, misappropriation of funds and act capable of destabilising the house.”

Mr Ogedengbe and Audu were suspended for unruly behaviour.

Osaigbovo said, “Mr Speaker, there is an impeachment motion before me and duly signed by 16 members of the house.

“Members who signed have found the deputy speaker to be corrupt and engaging in act capable of destabilising the house.

“I and 20 other members of the house remained committed to the All Progressive Congress (APC) and cannot leave the party.

‘‘We are even more committed to governor Godwin Obaseki and the re-election of president Muhammadu Buhari in 2019,” he said. (NAN)

0
Previous post Israel set to bomb Nigeria – Can this be true?
Next post ‘I Only Used My Fingers’; Man Arrested For Raping 9yr Old Girl In Delta State. Photos
Admin