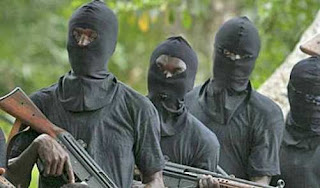 Unknown gunmen have kidnapped a former Auchi branch chairman of the Nigerian Bar Association, identified as A. Itemuagbor in the Uhunmwonde Local Government Area of Edo State.

It was gathered that the incident occurred along the Benin-Auchi expressway on Sunday.

It was learnt that Itemuagbor was on his way to Auchi from Benin, where he had attended convention of the Jehovah’s Witnesses when he was accosted by the abductors at Ehor.

The gunmen were said to have shot at him, killing his wife in the process.

He was later said to have been taken away to an unknown location, while a demand of N50m had been made for his release.

The Police Public Relations Officer, Mr. Chidi Nwabuzor, could not be reached for comments.

Calls put across to his mobile phone number rang out while he had yet to respond to a text message sent to him as of the time of filing the report.

But the chairman of the Benin branch of the NBA, Prince Collins Ogieva, confirmed the incident.

“I hope the police will succeed in releasing Itemuagbor unhurt and arrest the kidnappers. They should be brought to justice.”