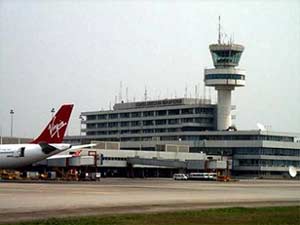 The dead passenger was to board flight EY674 (AUH) billed for departure at 09:55a.m. But it was gathered that the passenger, who arrived the airport early, suddenly slumped, gasping for breath.

According to an eyewitness, immediately he slumped, an unnamed Air Peace passenger tried to revive him by pumping his chest, “but he did not respond to the first aid treatment,” before the arrival of the Port Health officials, who immediately applied oxygen on him.

“But it was discovered that none of his vital signals were responding to treatment. At about 07:55a.m., Federal Airports Authority of Nigeria, FAAN, ambulance arrived to move the remains of the diseased to Lagos State University Teaching Hospital, LASUTH, for proper medical checks and examination, which also proved negative.

“The passenger was with international passport number A08086990 and was billed to check in at the D-Wing Departure Hall of the airport.”

Mrs. Yakubu Henrietta, General Manager, Corporate Communications, FAAN, confirmed the death, but said he was yet to be checked in at the time of the incident.