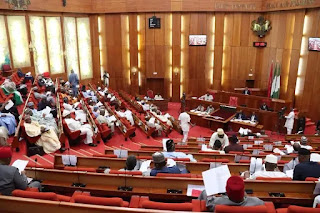 The Senate has ordered an investigation into an allegation that a government special intervention project fund meant for ordinary Nigerians is now being used as a campaign tool for the re-election of President Muhammadu Buhari.
Senate Minority Leader, Biodun Olujimi, said on Wednesday that the fund had been “politicised” and its beneficiaries were asked to submit details of their permanent voter’s cards.
For over thirty minutes, the Senate plenary became chaotic after Mrs Olujimi made the allegation.
She said officials disbursing the fund are circulating forms on which recipients are asked to write their names, gender and details of their PVCs.
She said the such forms are accompanied by another from Access Bank containing details of payment.
Displaying the two forms, Mrs Olujimi urged the Senate to investigate the matter.
“Right now the funds are being used for political reasons and they are being dispensed and given freely to those people who can bring up their PVCs and signed several copies and the forms are with me,” she said.
“One of the forms is here with me and it is being disbursed by the special intervention body. They are now using the fund that is meant for all Nigerians for political reasons.”
She said raising one of the forms: “This one has ‘I stand with Buhari’ on it and it has a place where your PVC will be written with your gender and an attachment from Access Bank where money will be disbursed to you.
“There is no corruption greater than people using our collective fund to maintain a political party. There is a need for a committee to be set up to look into this issue.”
First to show intention of speaking was the Senate Leader, Ahmed Lawan, who was promptly shouted down by opposition senators.
The chamber was soon thrown into confusion as both camps — ruling and opposition lawmakers — argued with senators move around the chamber.
“Tinubu has seen you,” opposition senators chanted at some APC senators, referring to the former Lagos governor and influential APC leader, Bola Tinubu.
Mr Lawan was finally given time to speak. He said the social intervention programme of this administration is “computer-based, very transparent….”
He was again cut short by senators who booed him. “They have seen you, they have seen you,” some lawmakers shouted.
Again, the chamber was thrown into another spell of rowdiness.
In a speech intermittently interrupted by yelling, Mr Lawan praised the SIP as a non-partisan initiative while showing support for investigation of Mrs Olujimi’s allegation.
The lawmakers finally adopted Mrs Olujimi’s prayer.
The Senate President, Bukola Saraki, said an ad-hoc committee will be set up to investigate the allegation.
Adopting an additional prayer by Barau Jibrin (Kano North), the lawmakers also agreed to investigate the SURE-P programme of the Goodluck Jonathan Administration.